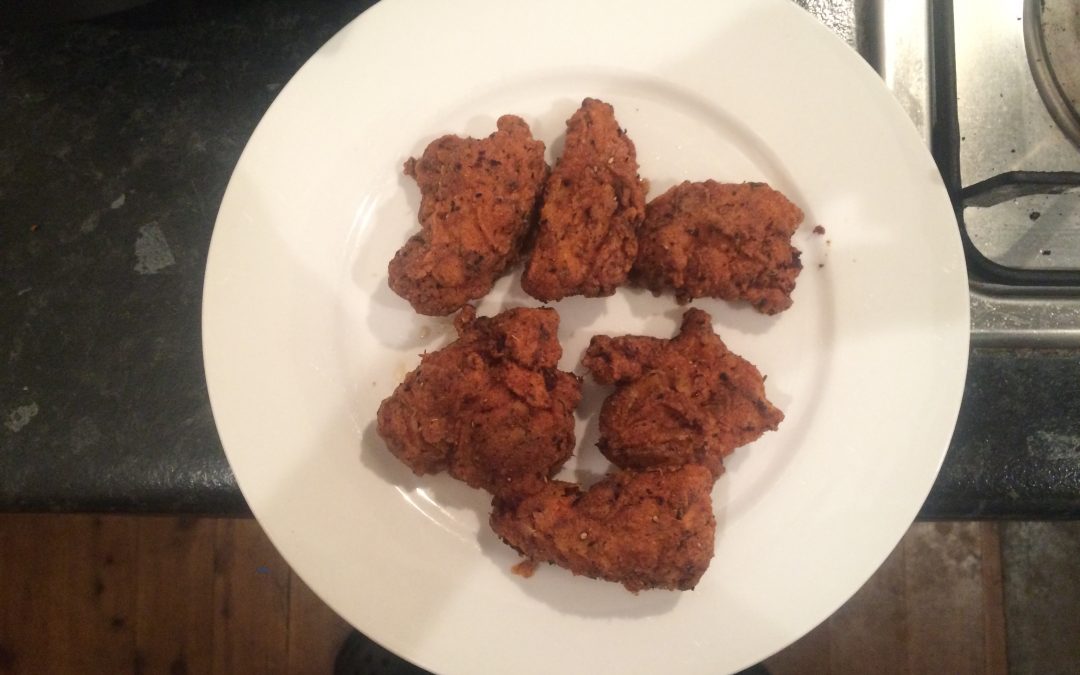 It contained a list of the secret  ’11 herbs and spices’ so I thought I’d give it a go as fried chicken is one of my favourites and it was an excuse to buy a deep fryer.

I tend to avoid KFC etc unless on a road trip but haven’t eaten old fashioned Colonel Sanders chicken for years. I used to like the original “Crispy Strips” that KFC sold as they had no skin or fat and I also liked the wicked wings. The traditional “piece of chook” is too greasy and the batter is a bit floury. Time to make my own.

I was getting sick of making sausage rolls and pies as I have not put in any time to develop some more recipes. I put it out there in The Pie Project  for followers to come up with some suggestions for different pies but only Adam posted a suggestion and that was for a seafood pie which suck. ( Sorry Adam)  So I am still looking for new pie flavours and would be happy to test-run your favourite meat pie filling within reason and don’t say Kentucky Fried Chicken Pie as I have already thought of that ……it could go viral like the Cruffin and Cronut. Maybe next week. 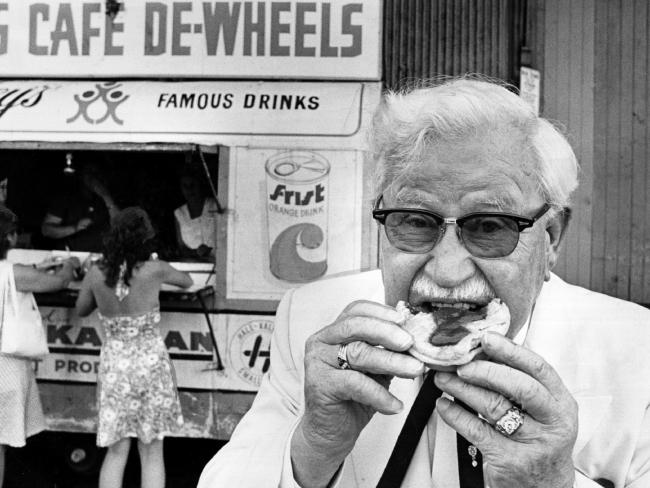 Armed with the recipe it was off to the shops to get the famous 11 herbs and spices, buttermilk, some chicken and a deep fryer – for $69 I chose the Sunbeam Multi Cooker which is just like an electric frypan only round and deeper. It can be used as a saucepan/frypan, a slow cooker and a deep fryer and I thought it could be useful to make my pie filling as well. 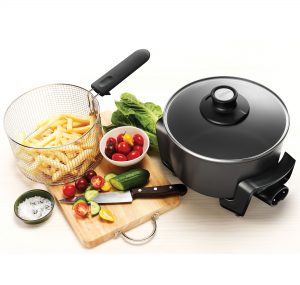 THE ORIGINAL 11 SPICES SECRET RECIPE? (As published in The Chicago Tribune)
Prep: 30 minutes
Soak: 20-30 minutes
Cook: 15-18 minutes
Makes: 4 servings
2 cups all-purpose flour
2/3 tablespoon salt
1/2 tablespoon dried thyme leaves
1/2 tablespoon dried basil leaves
1/3 tablespoon dried oregano leaves
1 tablespoon celery salt
1 tablespoon ground black pepper
1 tablespoon dried mustard
4 tablespoons paprika
2 tablespoons garlic salt
1 tablespoon ground ginger
3 tablespoons ground white pepper
1 cup buttermilk
1 egg, beaten
1 chicken, cut up, the breast pieces cut in half for more even frying
Expeller-pressed canola oil
1 Mix the flour in a bowl with all the herbs and spices; set aside.
2 Mix the buttermilk and egg together in a separate bowl until combined. Soak the chicken in the buttermilk mixture at room temperature, 20-30 minutes.
3 Remove chicken from the buttermilk, allowing excess to drip off. Dip the chicken pieces in the herb-spice-flour mixture to coat all sides, shaking off excess. Allow to sit on a rack over a baking sheet, 20 minutes.
4 Meanwhile, heat about 3 inches of the oil in a large Dutch oven (or similar heavy pot with high sides) over medium-high heat to 350 degrees. (Use a deep-frying thermometer to check the temperature.) When temperature is reached, lower the heat to medium to maintain it at 350. Fry 3 or 4 pieces at a time, being careful not to crowd the pot. Fry until medium golden brown, turning once, 15-18 minutes. Transfer chicken pieces to a baking sheet covered with paper towels. Allow the oil to return to temperature before adding more chicken. Repeat with remaining chicken. 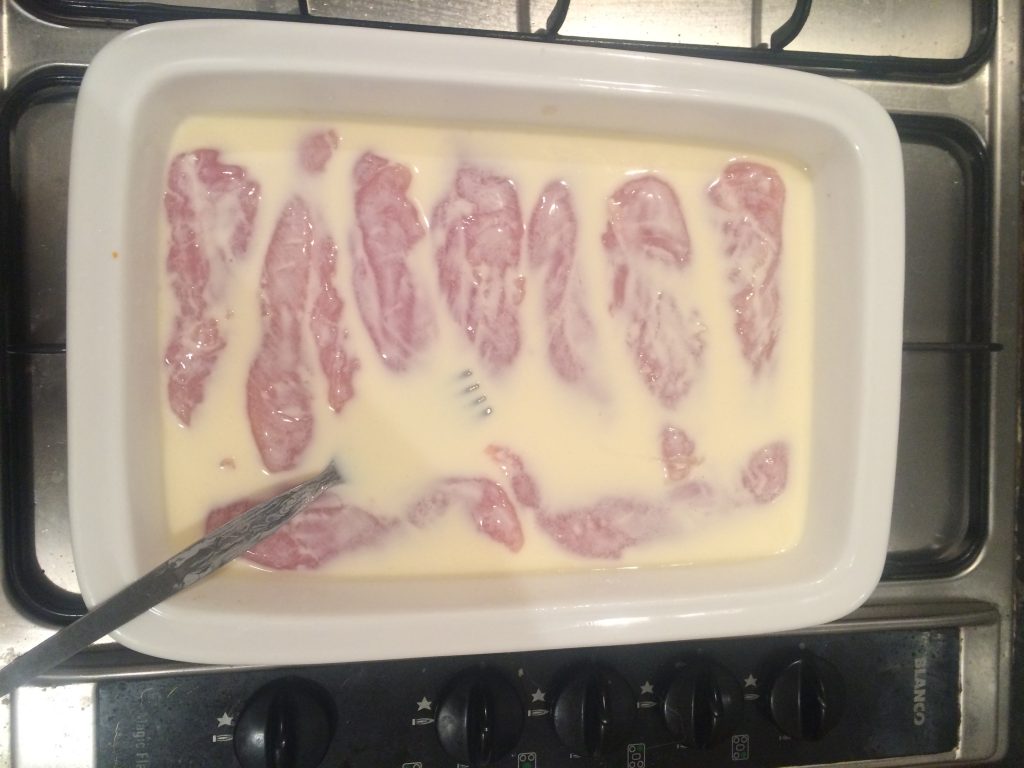 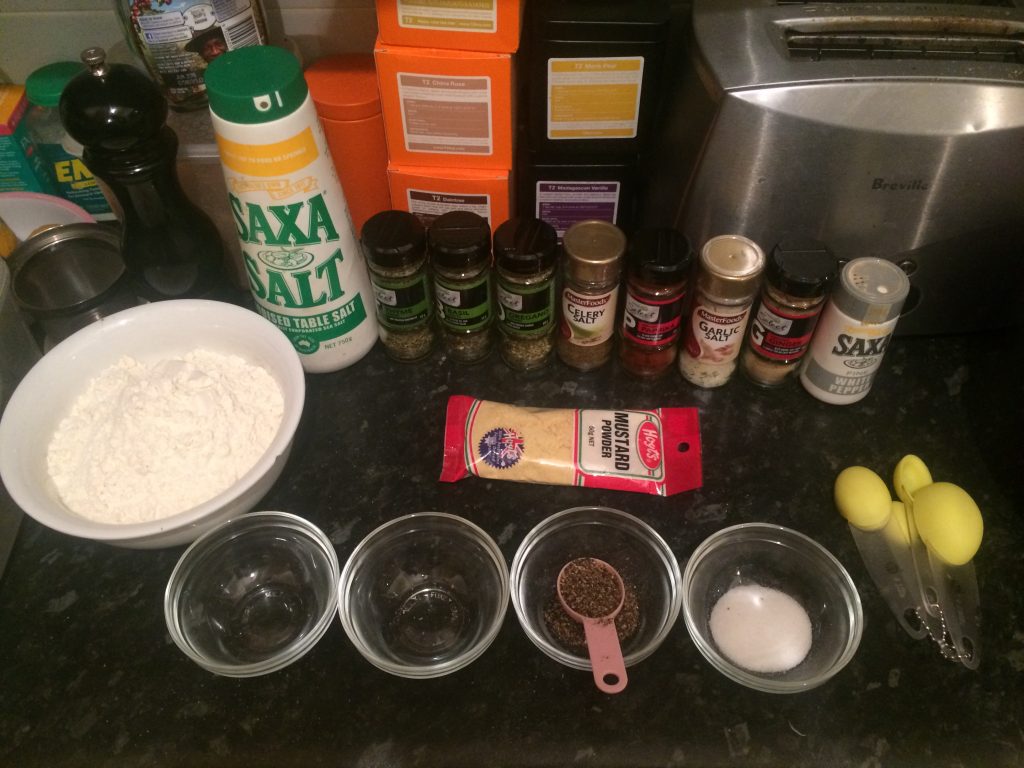 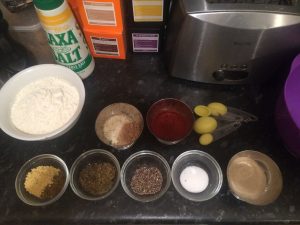 They all get mixed into the flour in a large bowl 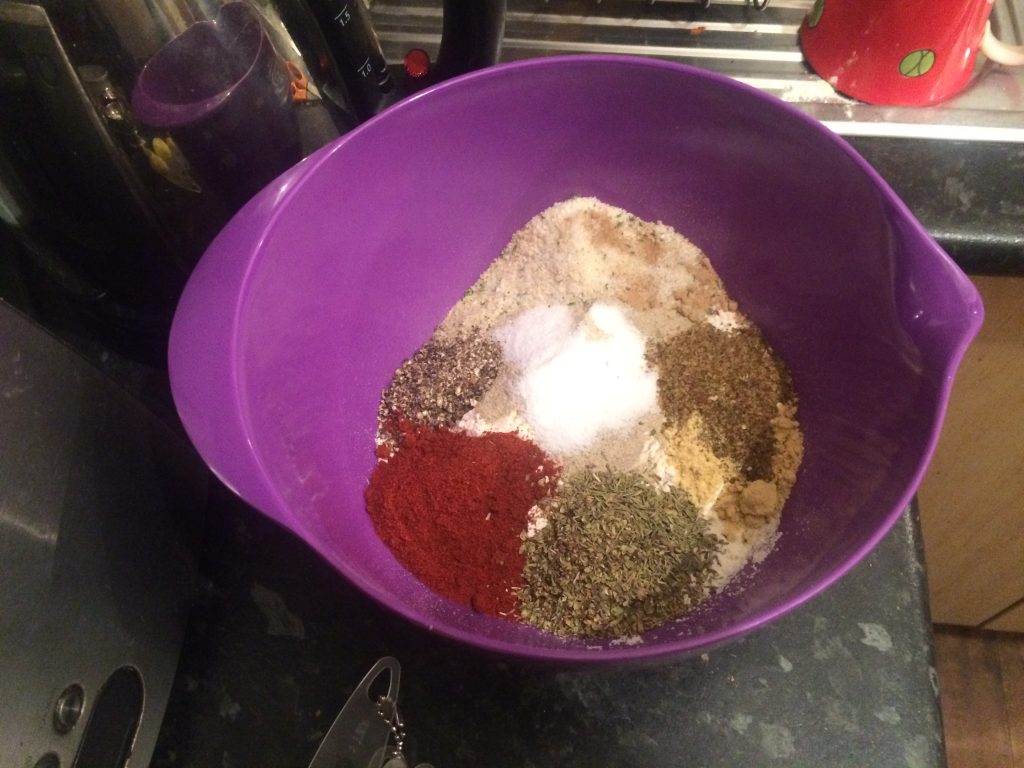 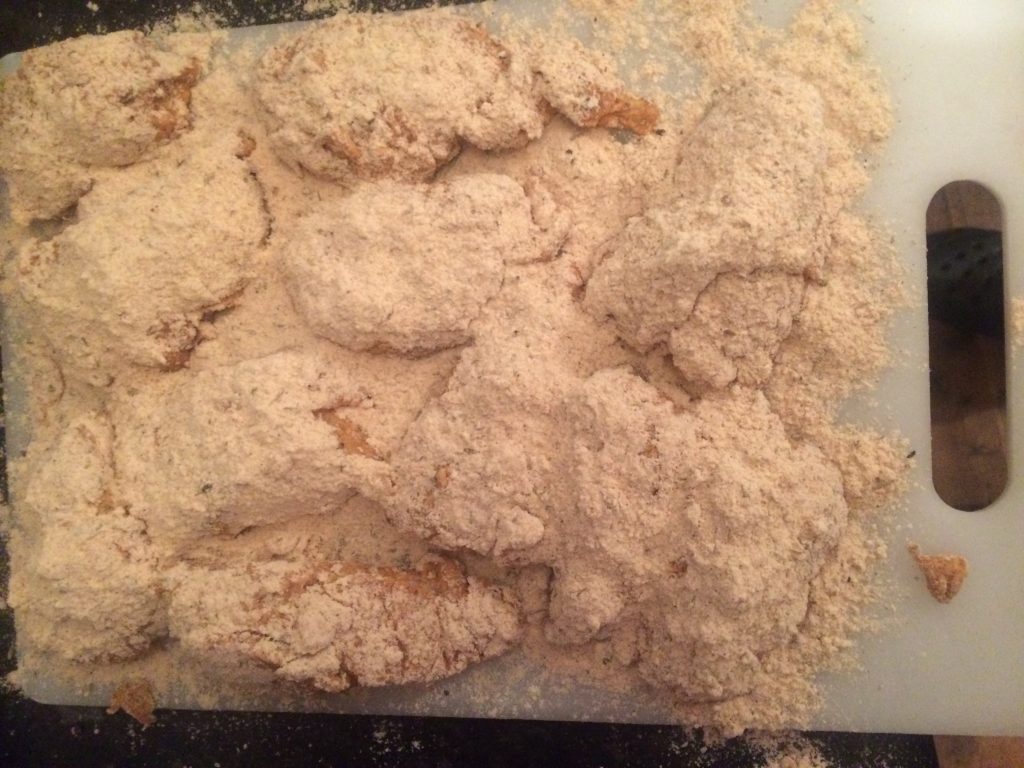 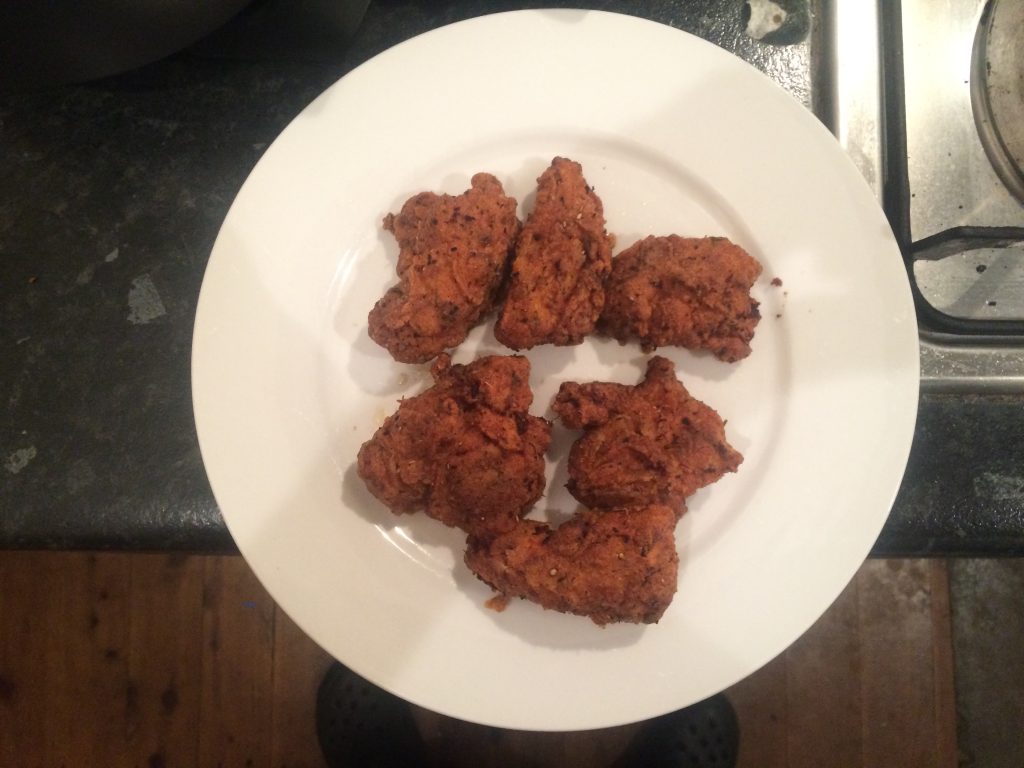 The flavour was noticeably not KFC maybe because the ingredients were a bit agrestic and just chucked in however this meant you could taste individual flavours.

Bare in mind this was skinless chicken tenderloins and resembled the original double-breaded  “Crispy Strips” in texture (left) – the current fake crispy strips from KFC taste like your mum got them out of the freezer, microwaved them and put them in a cardboard box to go soggy. Next i am going to try wings / drummettes which should be more like Wicked wings (right) 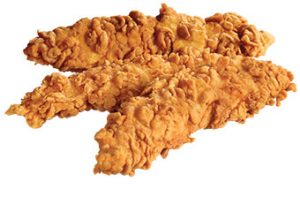 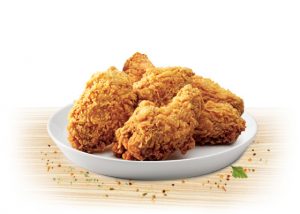 They were also excellent cold and I took some across the road the next day at lunchtime and offered some to Jody and Boris who thought they were very tasty.

I would only say that the 4 tablespoons of paprika is a bit much and overpowers the other flavours slightly as you can see here in this photo from the original news story – lots of paprika ! 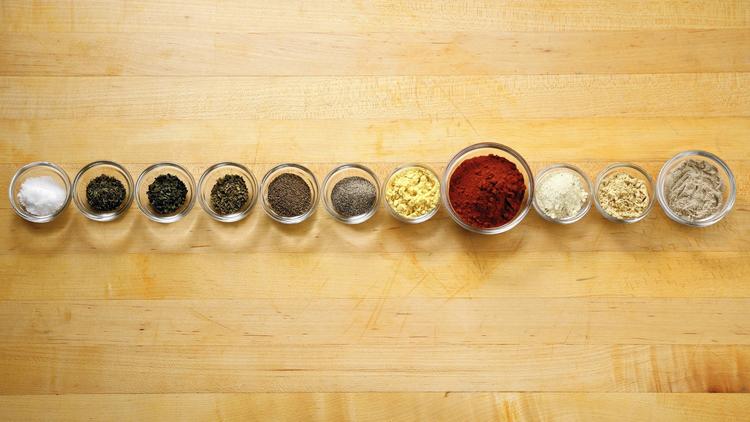