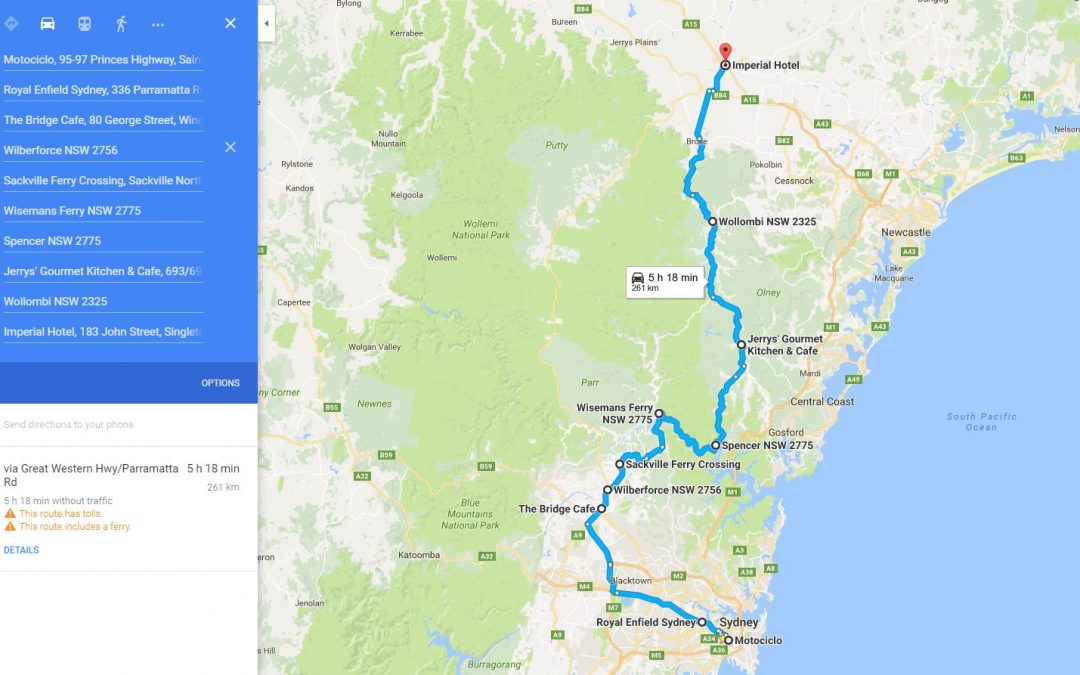 The inner city people were meeting about 730am at Motociclo in St Peters, and then onto Royal Enfield Sydney at Burwood to pick up any people along the way.

The plan was to assemble at Windsor for breakfast . It would be then on to Wisemans Ferry, Spencer, Kulnura, Wollombi and finally Singleton. 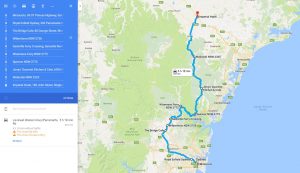 Space is always precious on a motorcycle and since this is only an overnight trip all we took was a change of clothes and some shoes so we weren’t stuck in our motorcycle gear for the whole weekend.

Our saddle bags can fit one small backpack each side containing our clothes (jeans T-shirt and hoodie) and we have have a tank bag for our personal items – wallet, phone, cap, sunglasses, neck warmer, water etc

I have a small pannier bag containing tools, spare tubes and cables and I added another pannier to the back bar containing our wet weather gear even though it wasn’t expected to rain it is handy to combat the cold.  The second pannier works like a backrest for Jenny but also makes it slightly more difficult for her to get on and off with her hip. 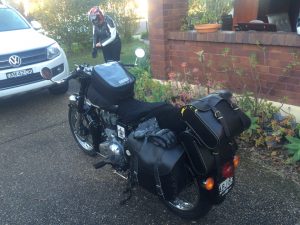 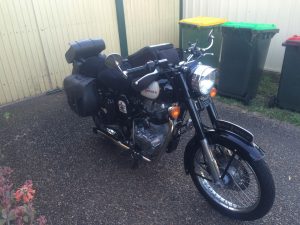 Immediately I felt the cold and wished I’d put the wet weather gear and my winter gloves on, my jacket has a traditional collar and does not do up all the way which lets a jet of cold air in around my neck and down my back. Naturally cold air pools in low lying areas and in the shadows and you could feel the change in temperature as we rode through these different geographic features, however we we soon in Windsor basking in the sun. 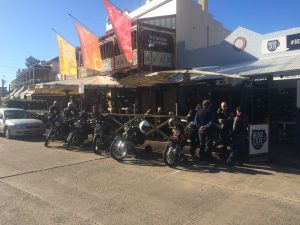 We arrived at the Bridge Cafe and found Gerad having a coffee so we ordered breakfast. Marie arrived from the Blue Mountains and then Ian from the South and finally the city folk Mike, Gupreet, Roger, Jo and Peter.

Cynthia and Bruce (El Presidente) dropped in to see us off which was nice of them.

After breaky/coffee we left for Wisemans Ferry via Wilberforce, crossing on the Sackville Ferry and up through Maroota.

We crossed the Hawkesbury again and proceded along the northern bank of the river heading for Spencer, Being in the shade it was cold and wet with moss on the road in places only getting relief briefly when the road turned north into the sun or stretched towards the river away from the towering mountains and cliffs of the region.

Soon we were in sunny Spencer where we stopped at the General Store for morning tea. 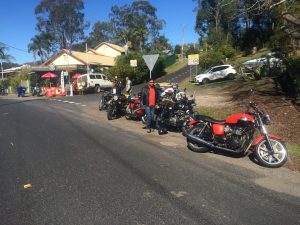 A lovely spot run by a very hospitable bloke who was very keen to have us bike riders and clubs visit his small riverside community.

He told us of bike club nights that they hosted and how they arranged a chef and a BBQ and people ate dinner by the river and he offered to take a group photo for us. 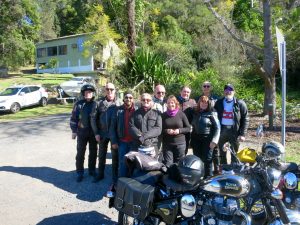 We wound our way up out of the Hawkesbury river country into the Watagans and stopped at Jerry’s Cafe in Kulnura for a quick fuel stop and then to Wollombi for lunch. 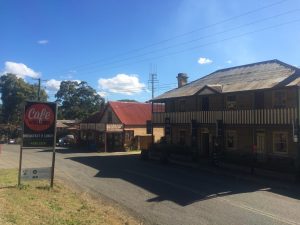 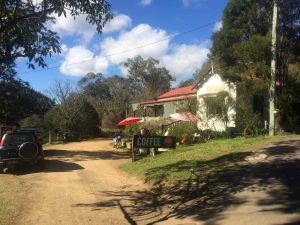 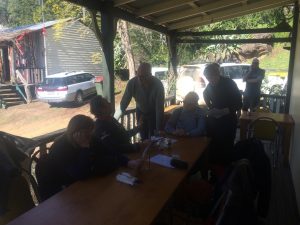 Lunch was at the very pleasant Cafe Wollumbi.

Via the Broke Road, through Broke It was not long and we were in Singleton where “MOST” of us checked into the Mid City Motor Inn. 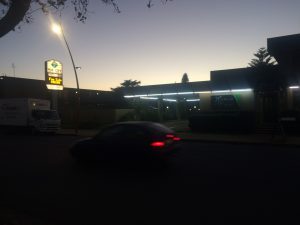 Roger had found another motel down the road but Mike and Gerad chose to book into the Imperial Hotel across the road from our Motel. 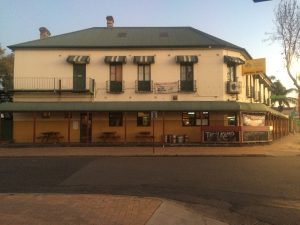 I relayed to Mike the phone conversation I had with the Imperial about their rooms and facilities and how I was advised by them to stay at the Mid City Motor Inn across the road.

About 15mins later he and Gerad turned up back at the motel with a room key, Gerad exclaimed “Hallelujah !” as he entered the room and they told us the story of how the first room in the pub had the door kicked in and the second, which was allocated to them had someone already in it and only one bed and that the barmaid had kindly refunded his 20 bucks. All good in the end.

After changing I followed Ian and Peter across the road for a sherbet. and shortly after was joined by Mike and Jenny and Roger where we discussed dinner. 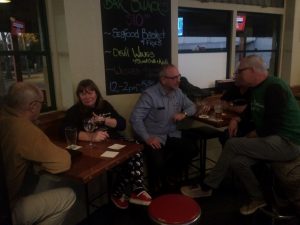 Initially we anticipated eating at the hotel however It was unanimous that we seek alternative arrangements as it was more of a pub bistro than restaurant with Burgers, Surf and Turf and Chicken Parmy on the menu.

Next closest choice was a time-warp to the 70’s at the Motel’s dining room where they also had Beef with a Medley of Seafood, Chicken Cordon Bleu, Garlic Prawns or Pasta Boscaiola…Hmmm

We ended up not too far away at the Pearl Light Palace for Chinese which was beautiful and they even had chopsticks how fancy ! 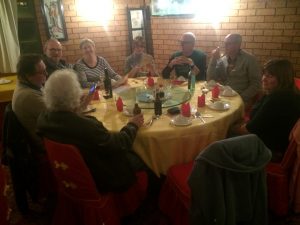 The next morning we geared up and got ready for our return trip down the Putty Rd. 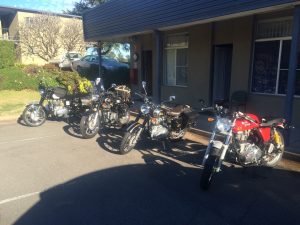 After refuelling we stopped in town at the Grainery for breakfast which was a bit slow as being the only place open they had a bit of a crowd. Excellent food and service though. 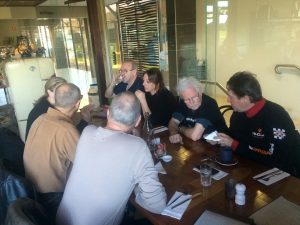 The trip down the Upper Putty from Bulga was great I had not done it before on a bike and I really hooked into those bends and managed to make Jenny feel sick on the back which Jo reprimanded me for with just a “look”.

I was full of sausages eggs bacon mushrooms tomato toast and coca cola so I was sort of glad the road opened up for some easy cruising in the middle section. 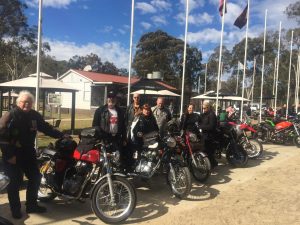 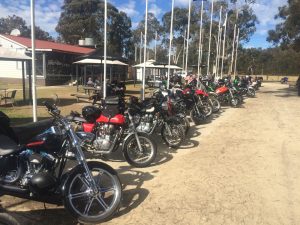 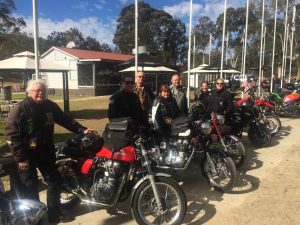 Thanks to Peter Jackson for organising such a great ride which will become a regular I’m sure.