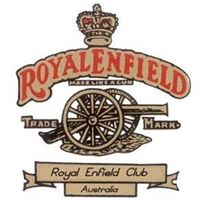 The 2018 winter rally was held on the Queen’s Birthday long weekend at Tathra Beach on the NSW south coast.

Tathra was chosen for a number of reasons, one being the location is easily accessible by both NSW and VIC members being close to the New South Wales / Victoria border and another was that we wanted to assist by giving our patronage to the local community after the recent devastating bushfires which claimed 69 homes, 30 caravans and cabins and damaged a further 39 houses.

Being a long weekend, two rides were organised for the weekend, a shorter ride on Saturday up the coast and a longer Rally ride on the Sunday heading up the escarpment and looping back thru the mountains.

Saturday saw us heading north from Tathra crossing the Bega River at Mogareeka Inlet then through the villages of Tanja and Wapengo, where the Walkers lived from 1979 to 1982. Bruce and Cynthia stopped to show the group the house that they had built. 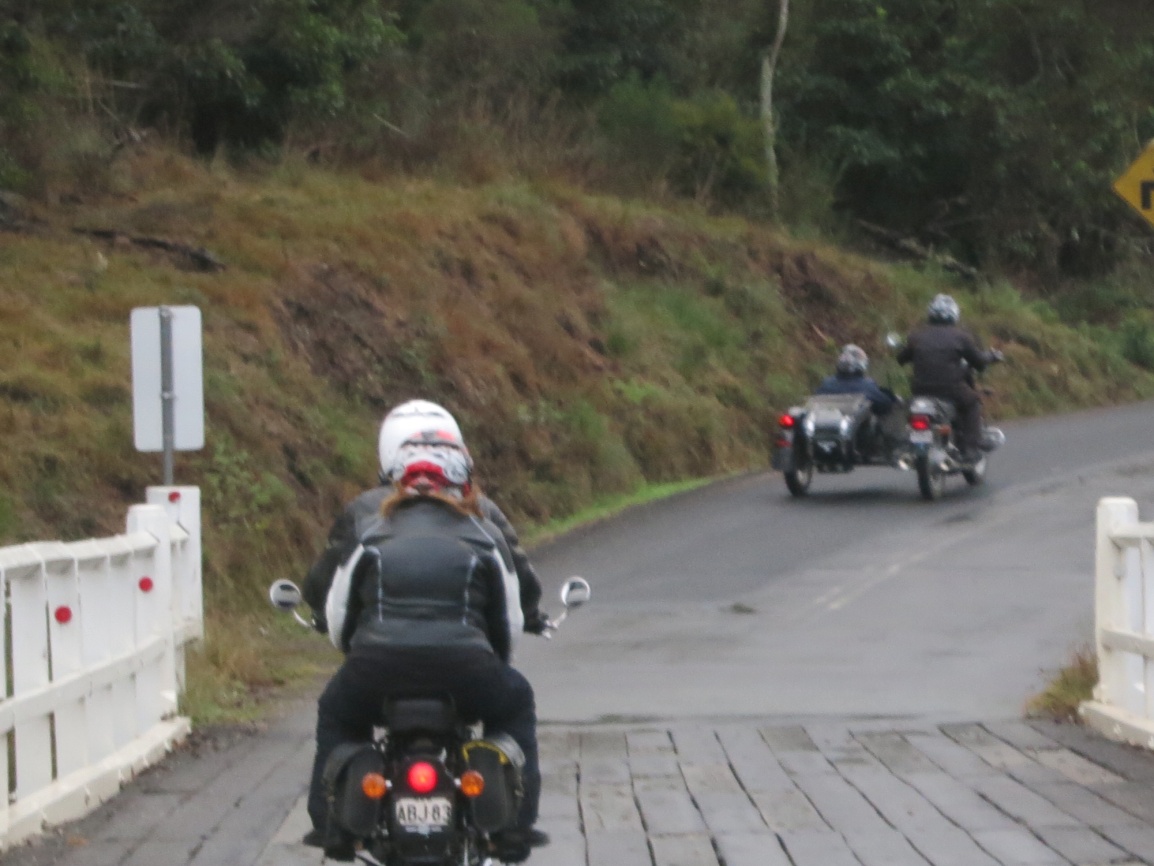 One of the many one-lane bridges that cross the creeks, lakes and inlets on the far south coast 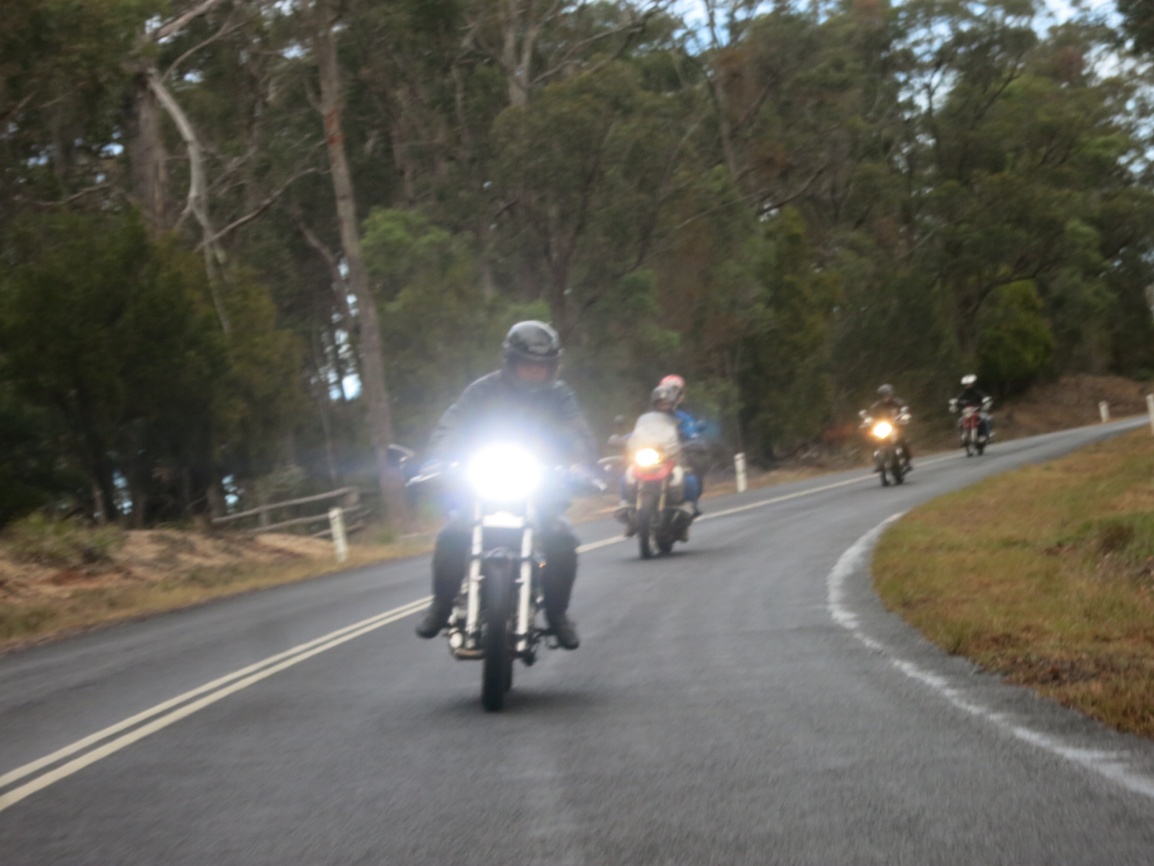 Allan leading the pack on his Electra-Zuki

Continuing through Murrah and Cuttagee Beach we arrived for morning tea at the fishing village of Bermagui where my Grandmother was born in 1900, by the side of the road under a horse dray as my ancestors passed through this area via the same roads we had just ridding on, travelling from Cooma to relocate their family to parts unknown before eventually settling in Sydney. 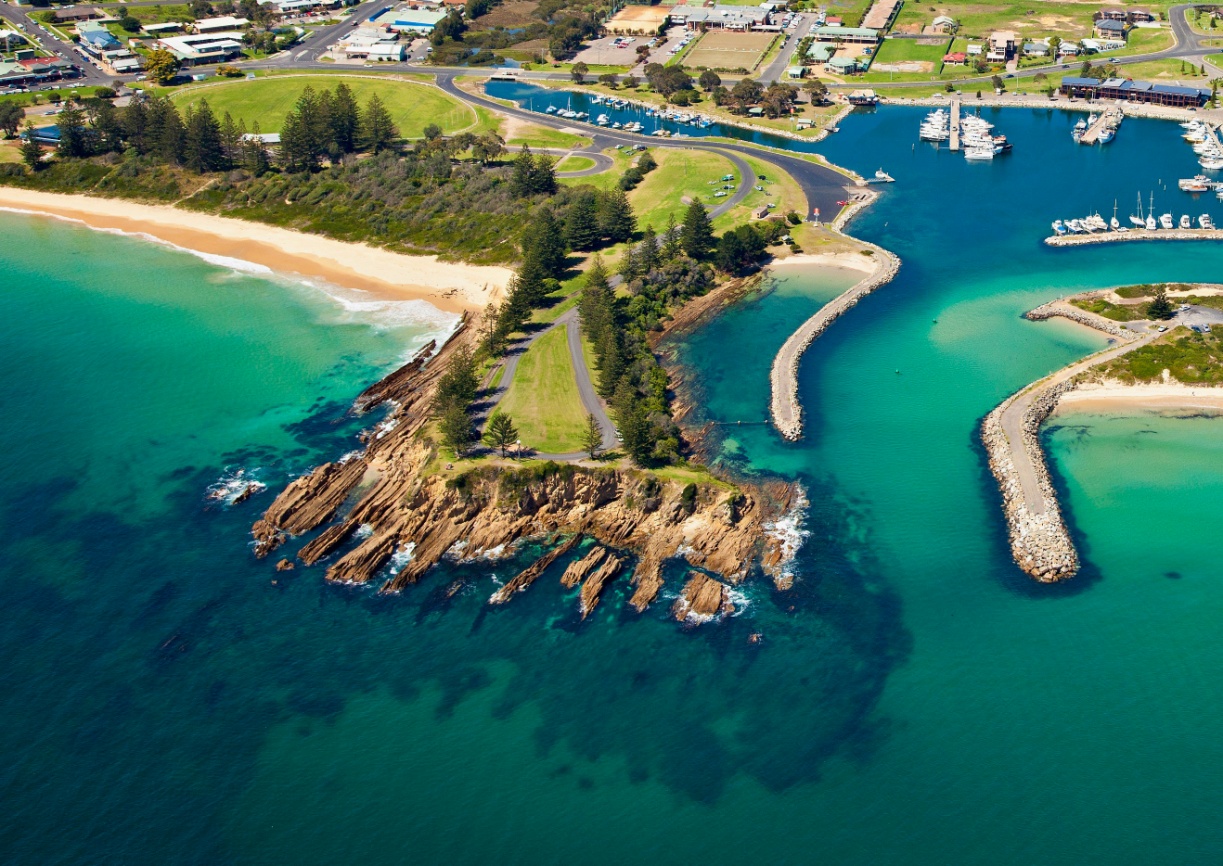 The picturesque fishing village of Bermagui 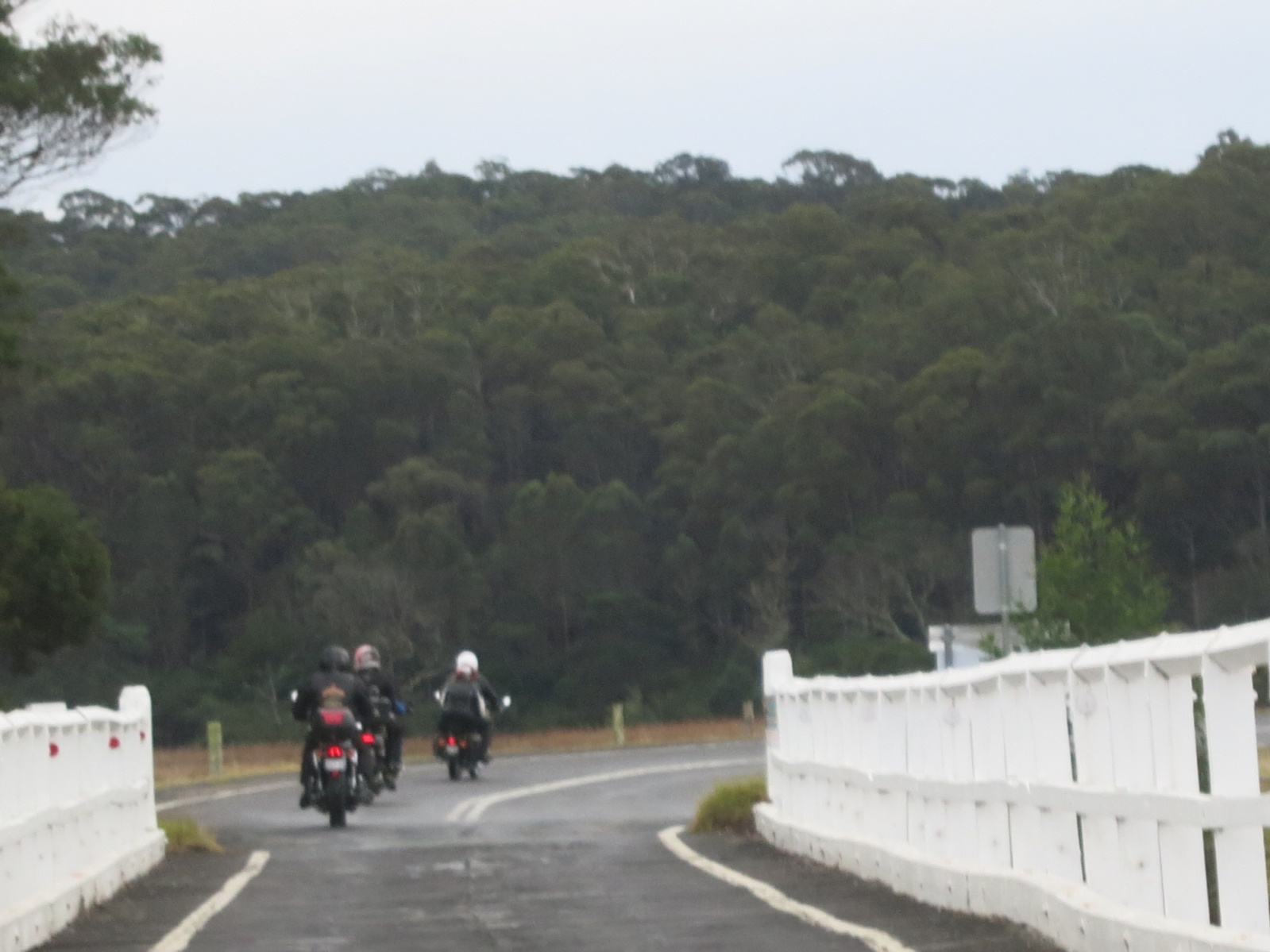 Upon leaving Bermagui we crossed Wallaga Lake and joined the Prince’s Highway briefly before turning off towards Tilba on Corkhill Drive.

Central Tilba is a perfectly restored and maintained period village protected by National Heritage listing. It features a host of unique shops and galleries showcasing antiques, traditional crafts and woodwork, a range of cafes and the ABC Cheese Factory. 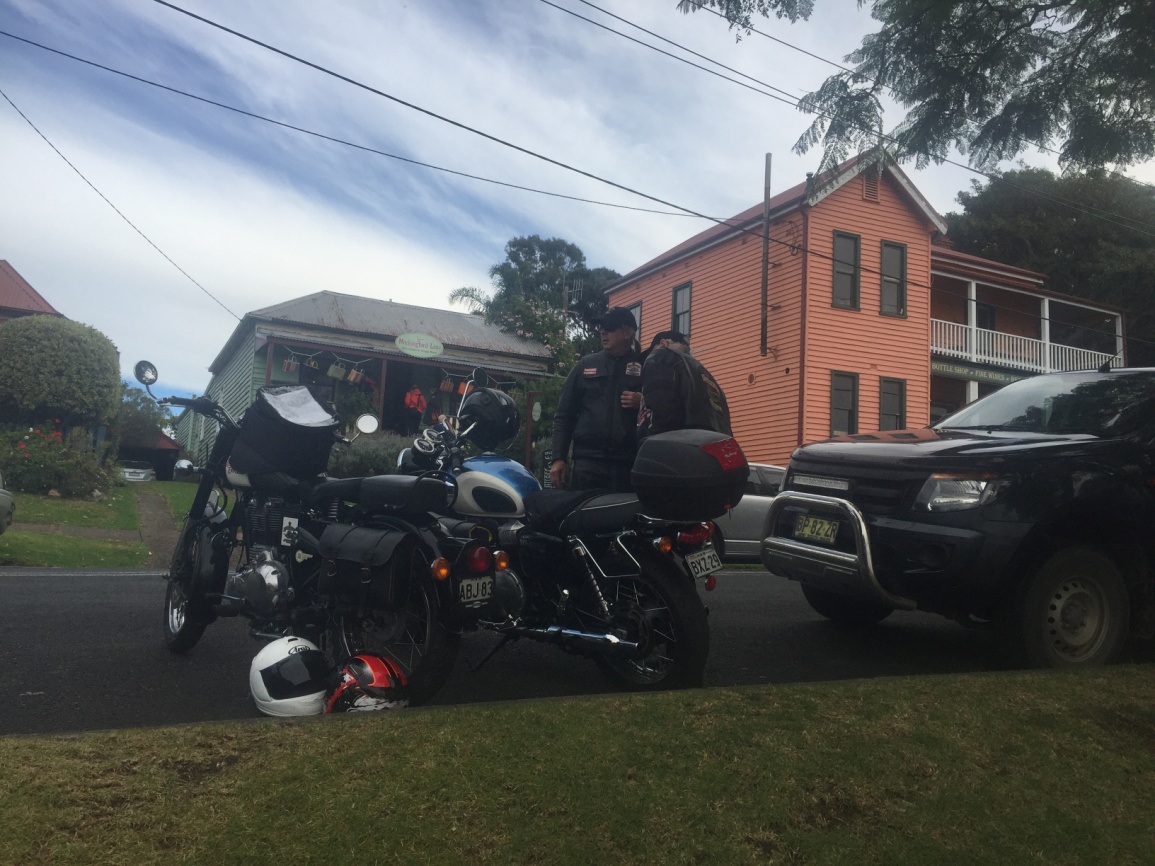 Craig and Ian checking out Ian’s Triumph opposite the tiny Tilba pub. 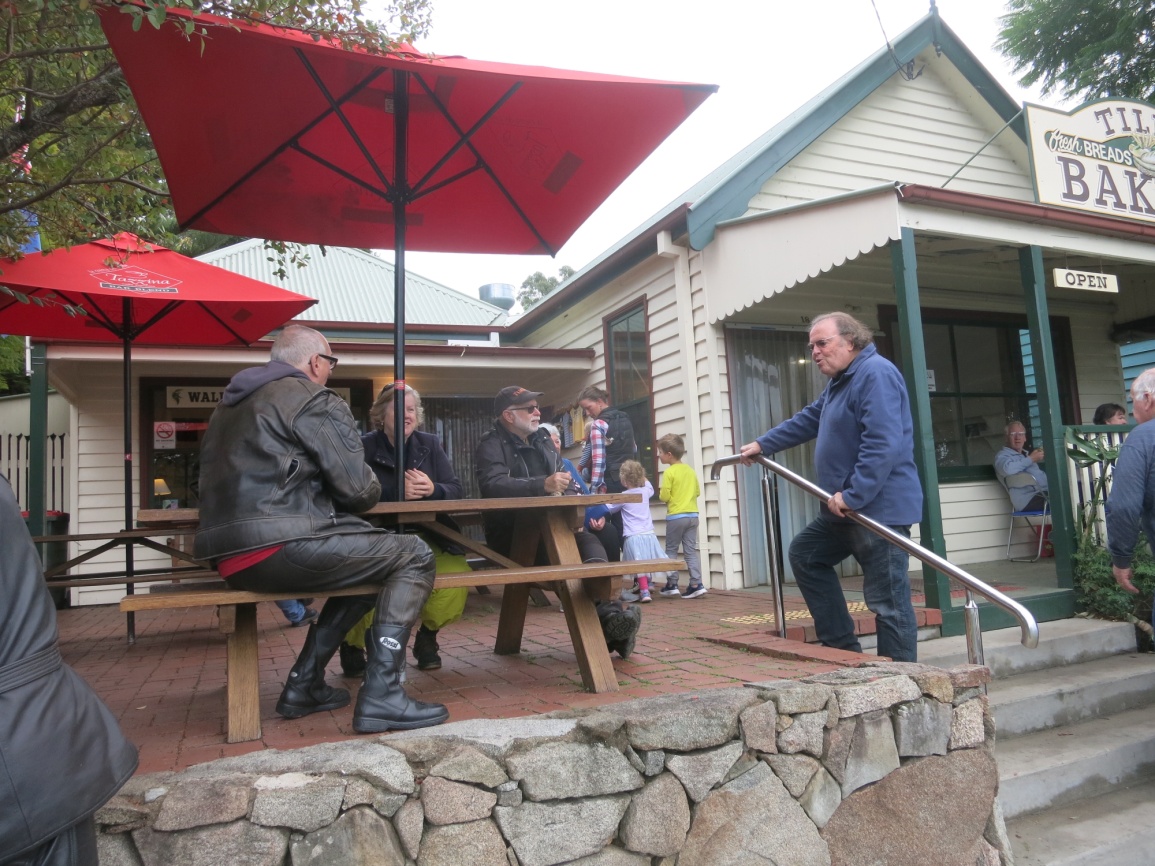 After bite to eat and a stroll up and down the village looking at the wares we headed back. 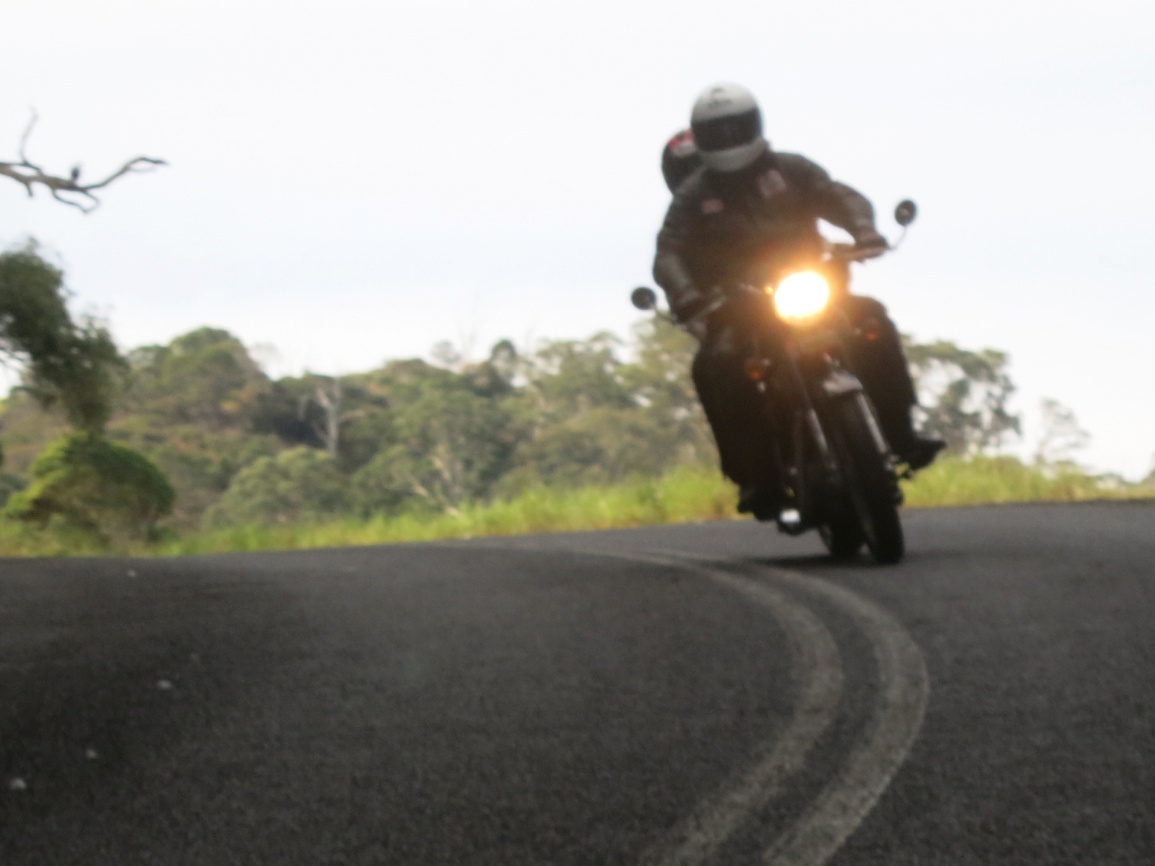 Most people chose to return the way they came and to quote Sir Bruce “A road ridden in the opposite direction is a different road”.

Notwithstanding, Craig and Jenny and Roger and Narelle decided to go back via the highway stopping in historic Cobargo to check out the town which has similar tourist attractions to Tilba and then through Bega to Tathra.

For Sunday’s ride, which would see us going to Nimmitabel for morning tea and Bombala for lunch, we assembled outside Tathra School before proceeding thru Bega and up Brown’s Mountain. 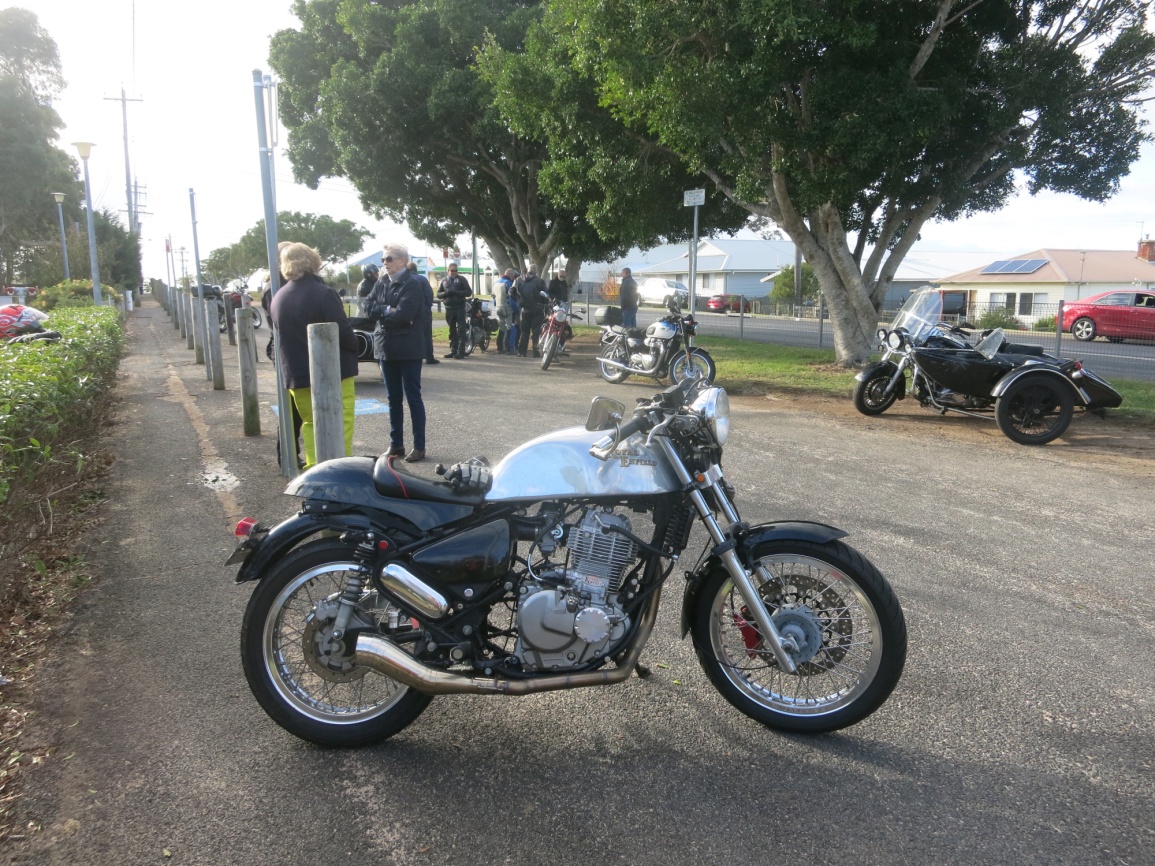 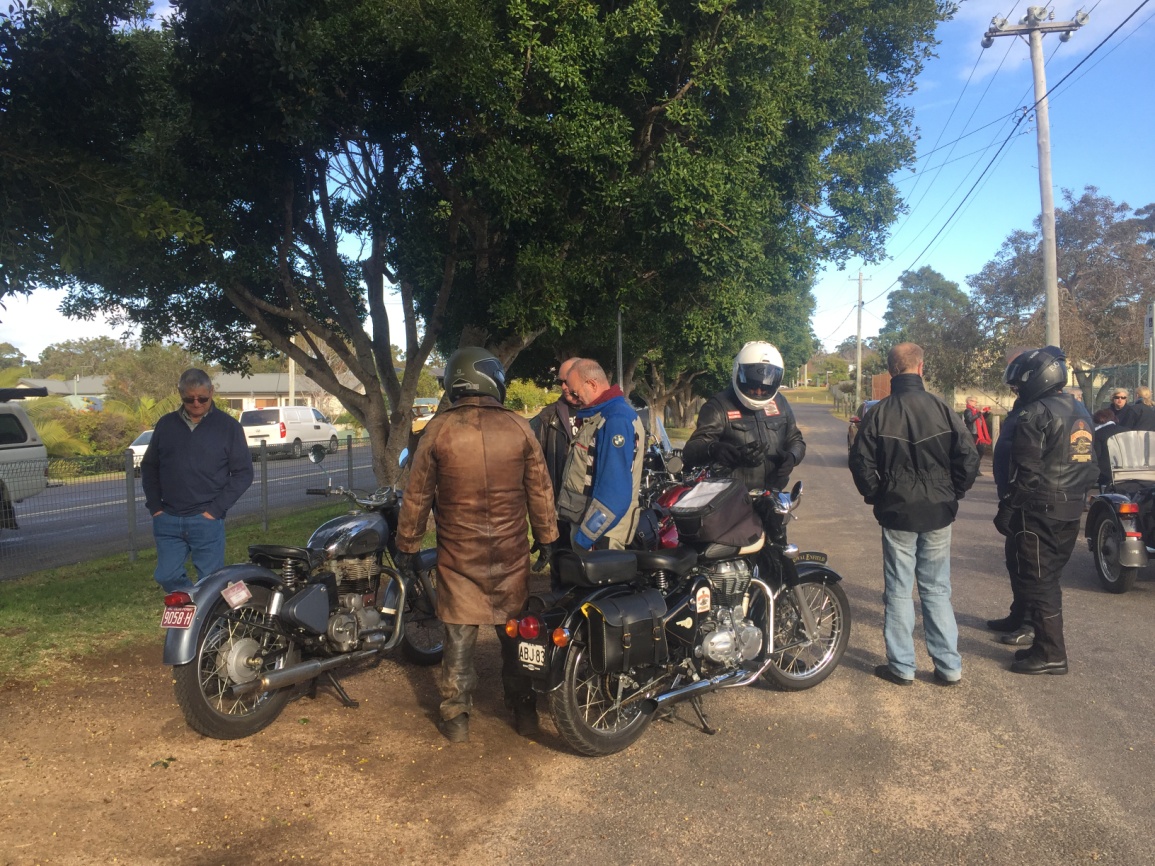 We went through Bega and along the Snowy Mountains Highway through the foothills of the mountains before our climb up to the plateau. 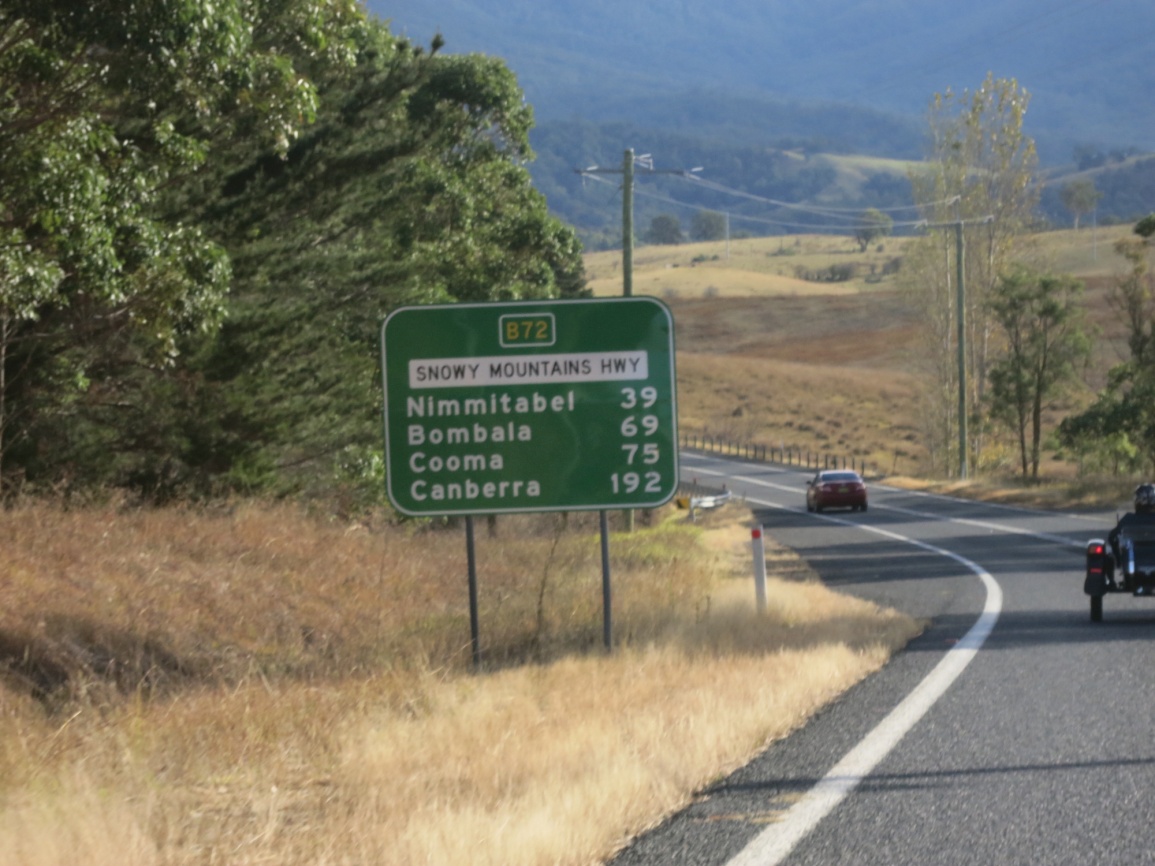 The “better half” of John’s outfit !

The road wound up Brown’s Mountain which has an elevation of 1243m ASL through the White Ash forests and ferns and up onto the Great Dividing Range. 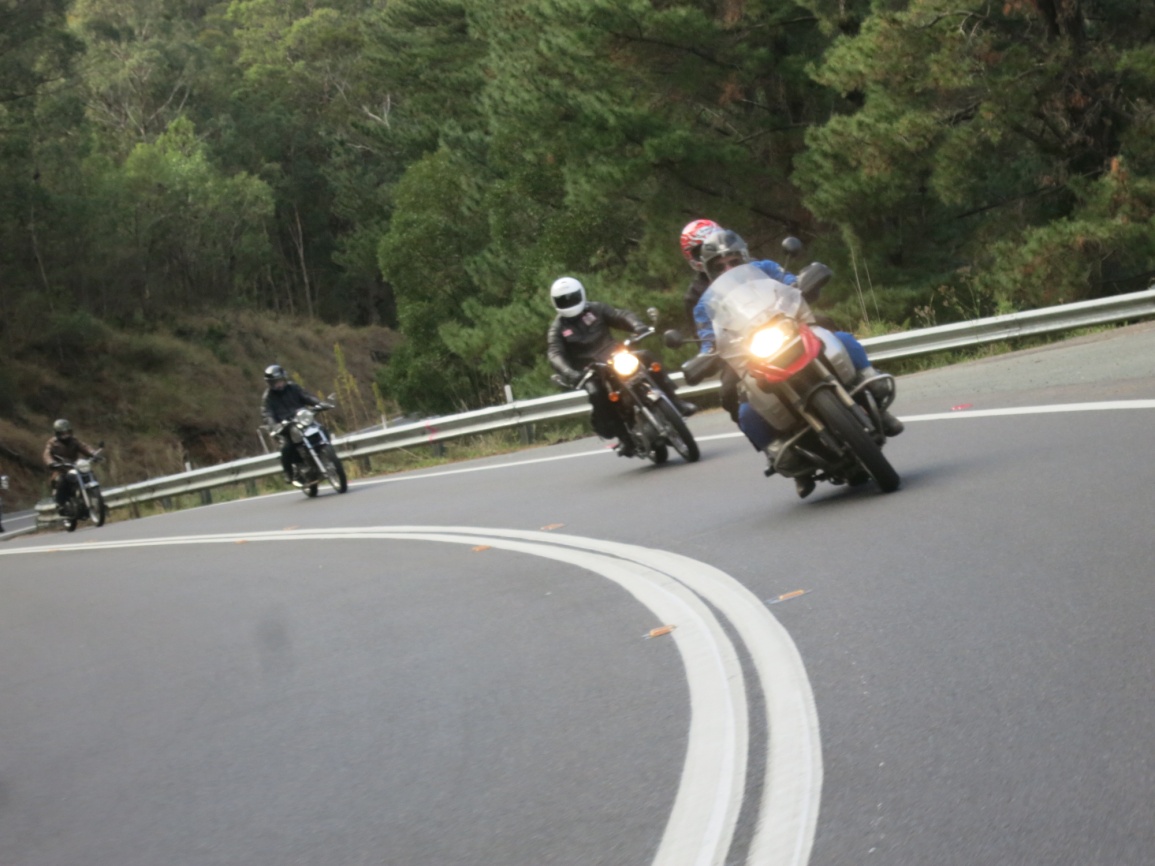 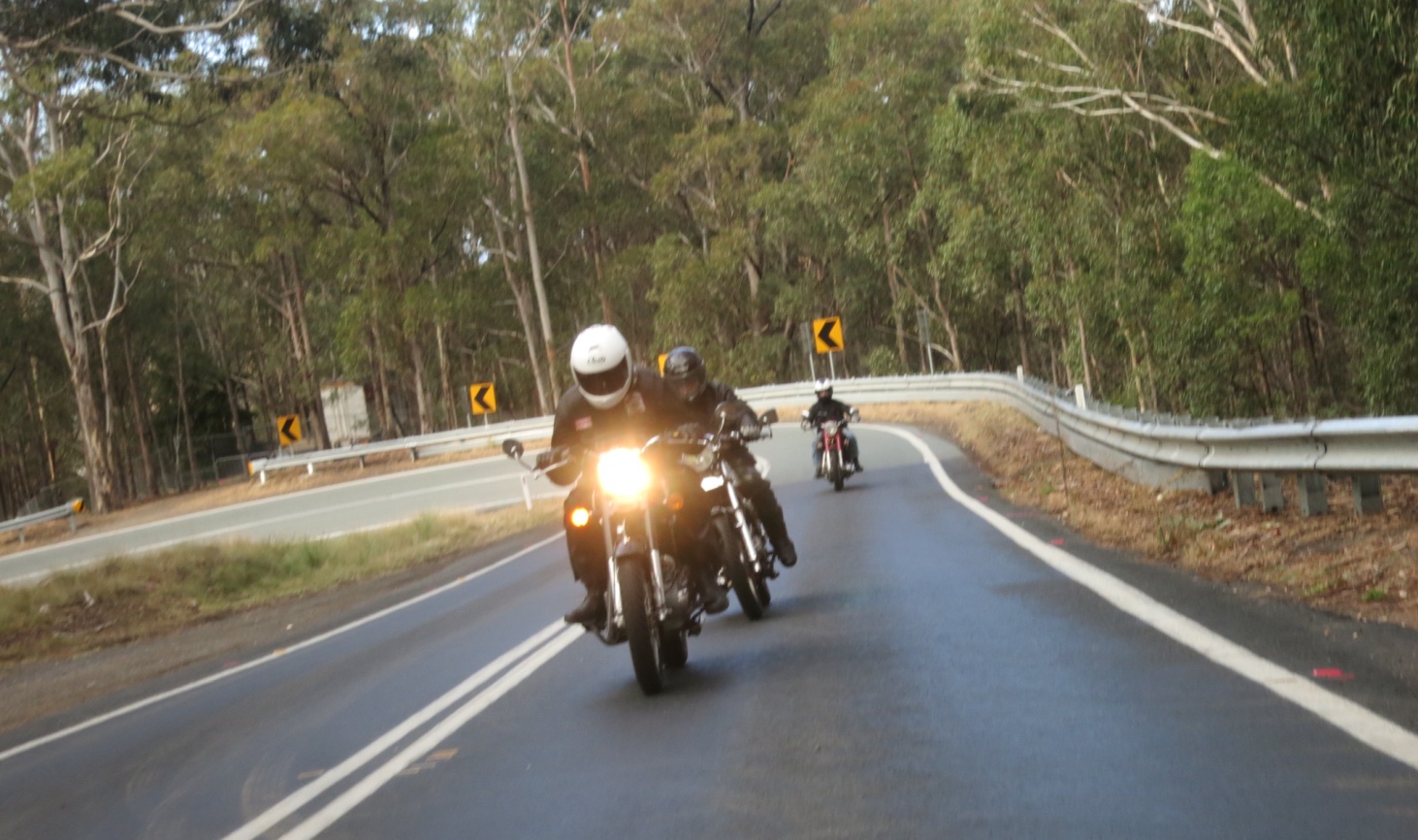 Wringing its neck to maintain momentum up the hills 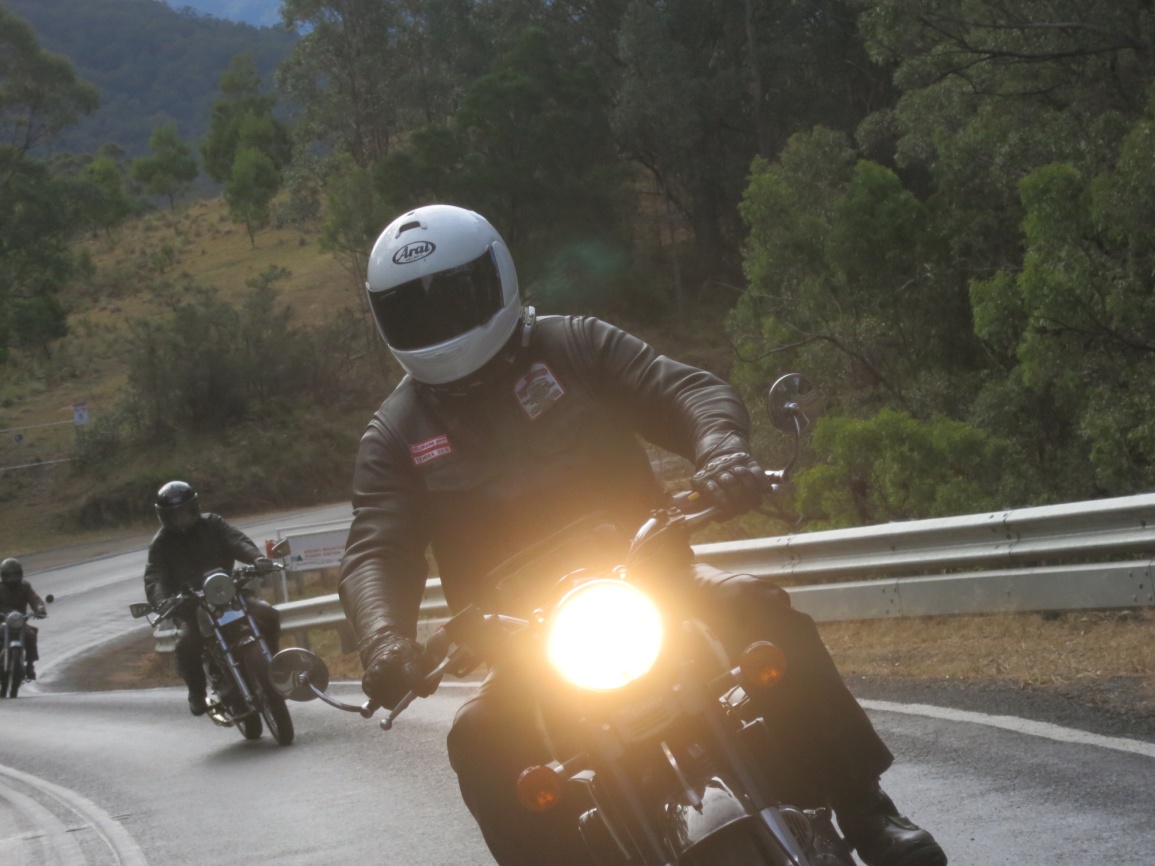 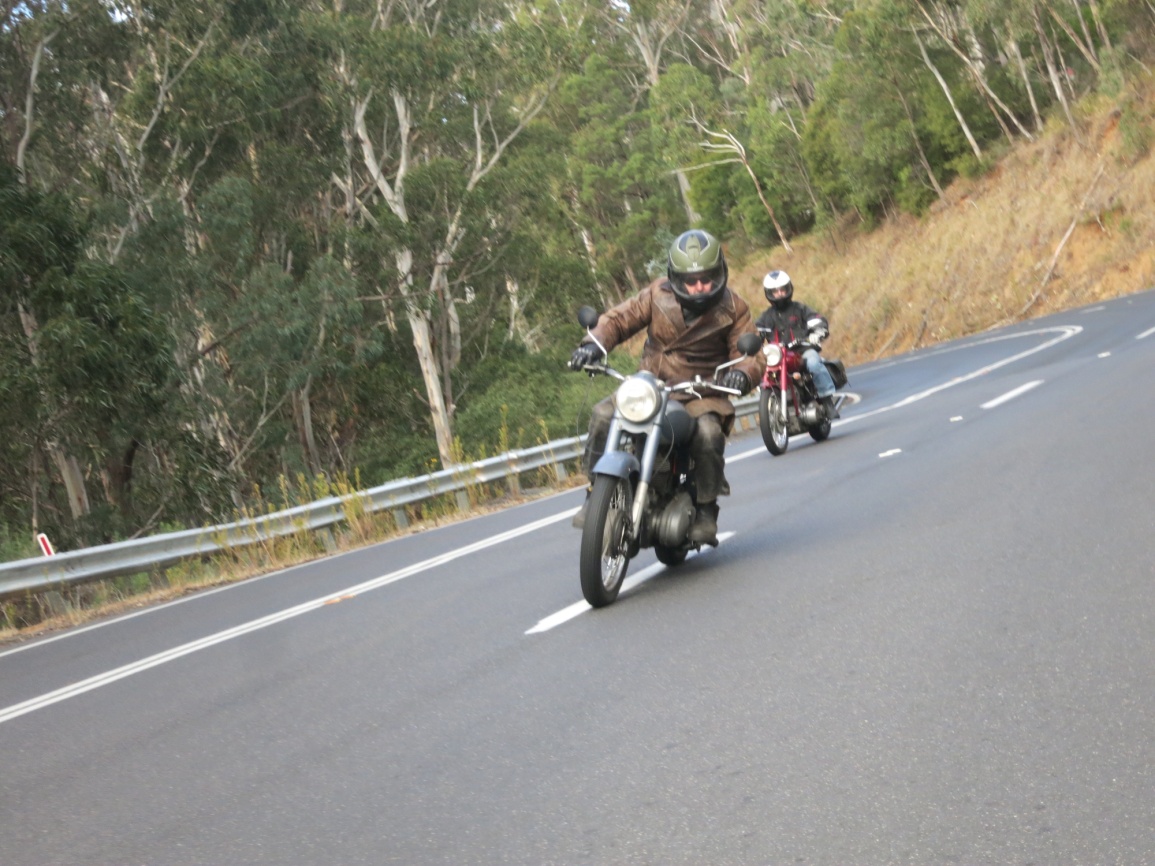 Once we reached the summit it was evident that we had climbed to a fair altitude as the temperature dropped considerably.

From there it was a short ride to Nimmitabel for a stop at the bakery which has an elephant next door ! 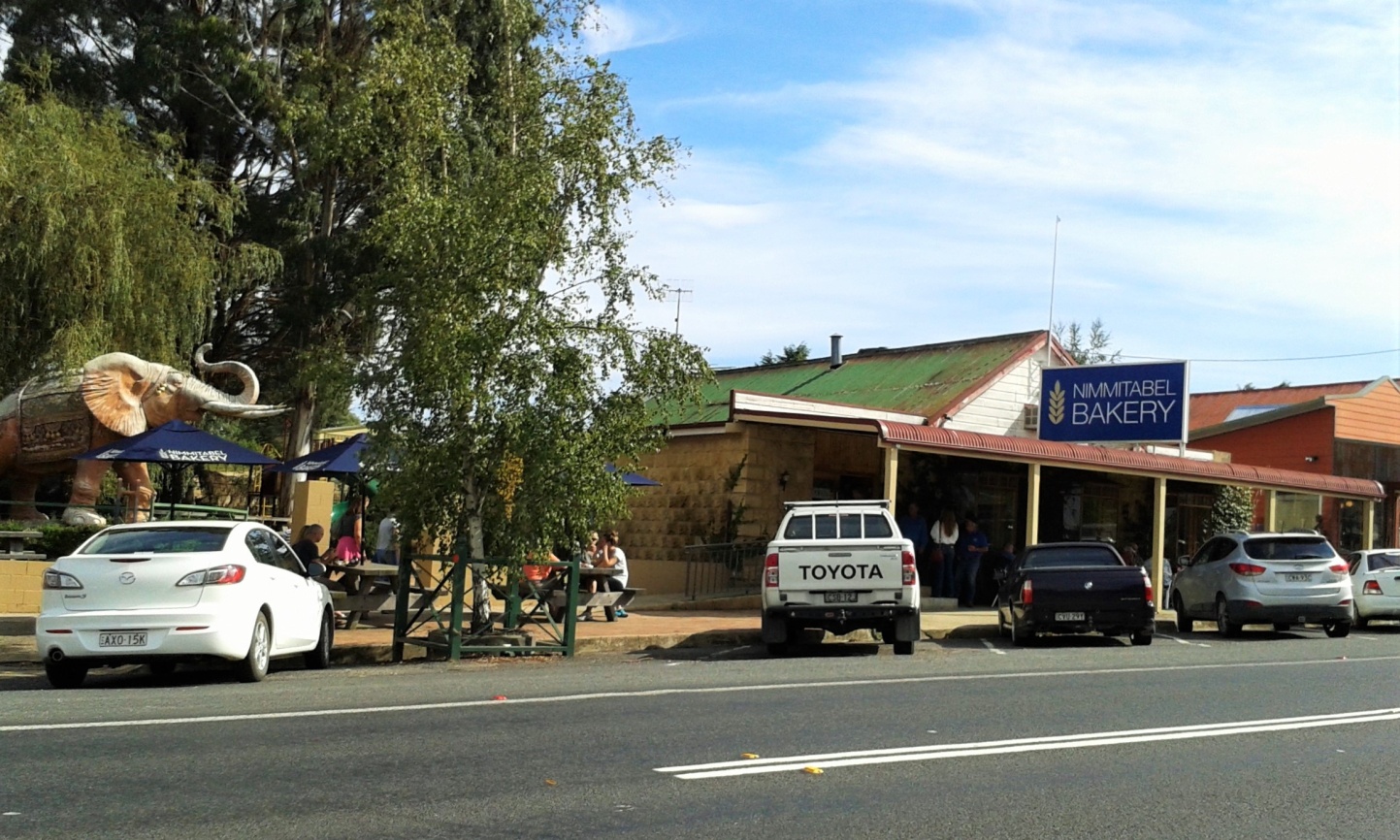 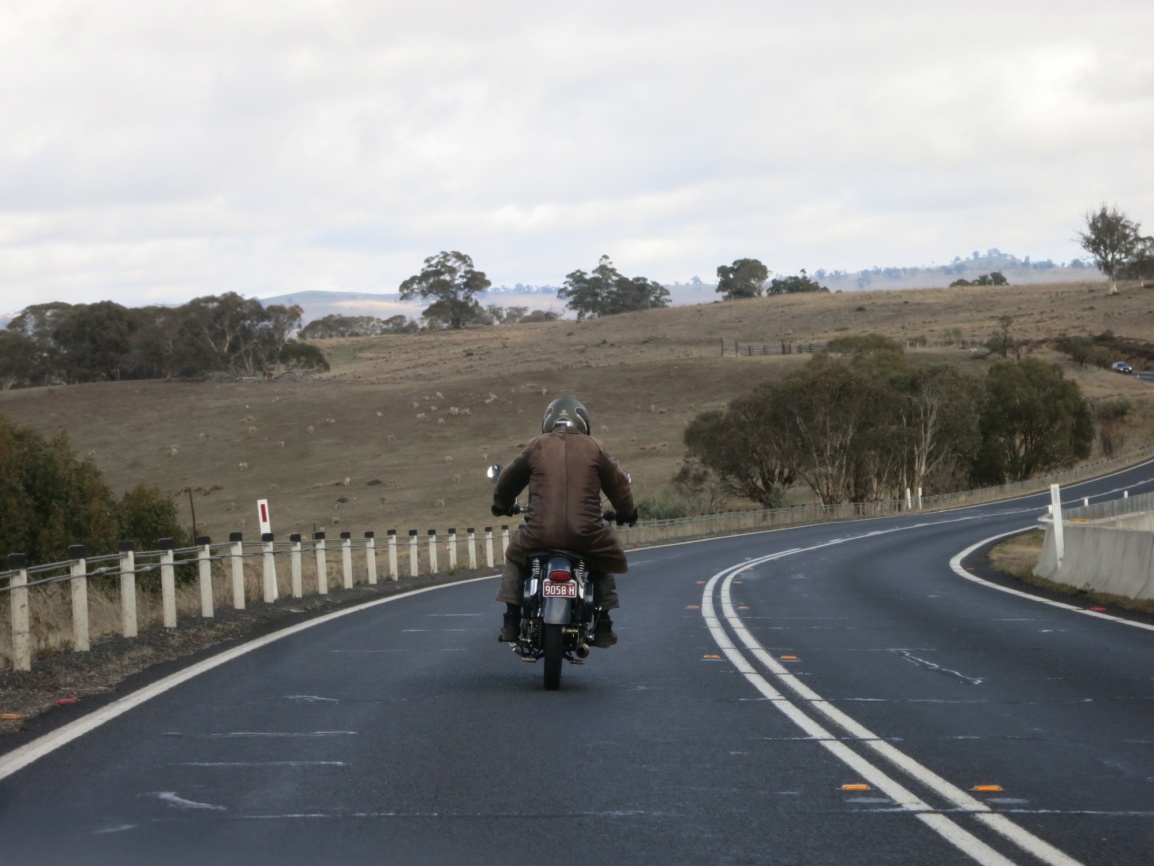 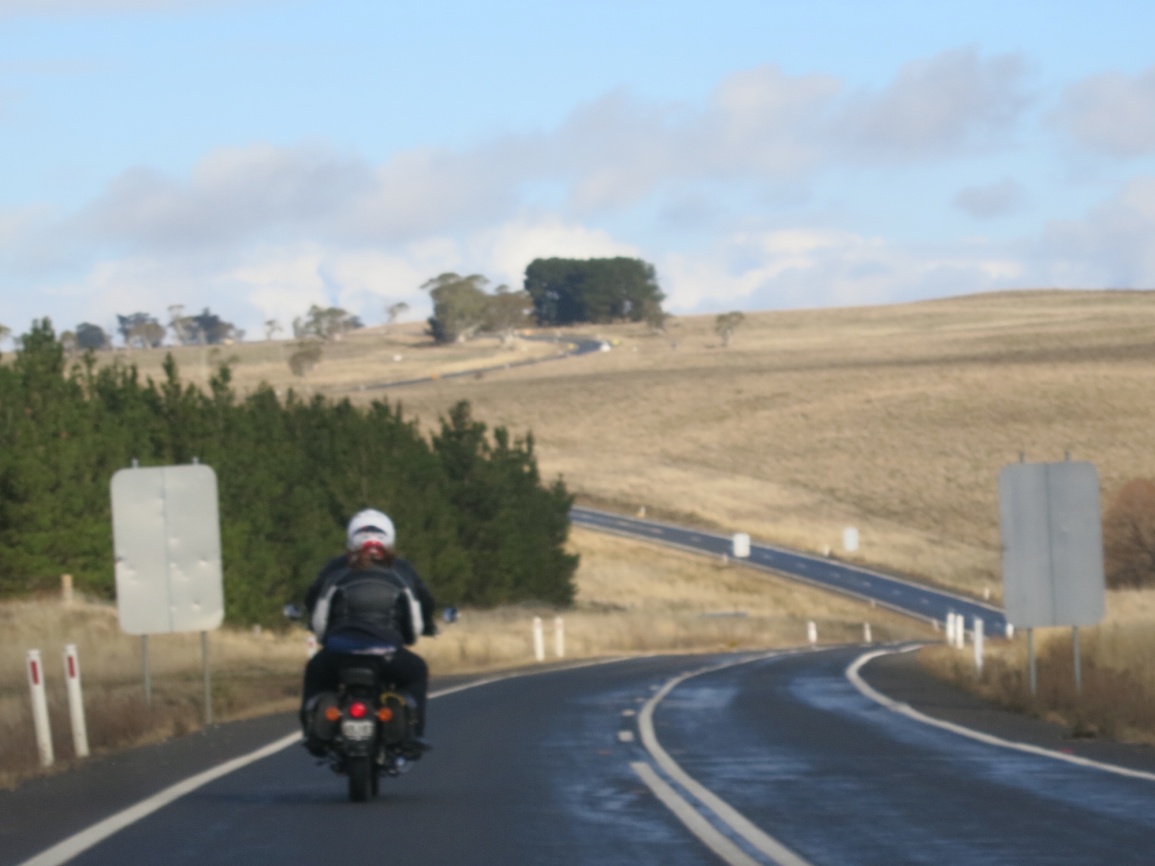 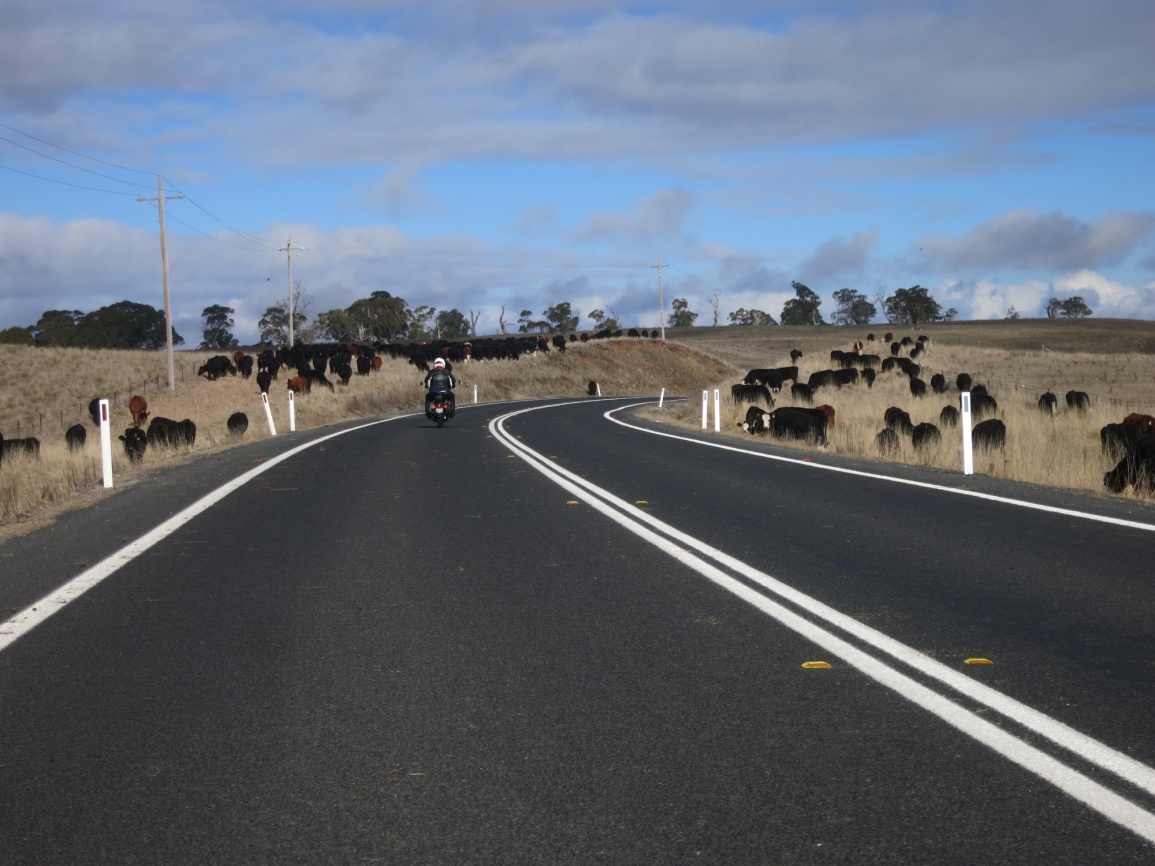 We stopped in Bombala for lunch then headed through Cathcart and down Mt Darragh to Wyndam and on to Candelo via Myrtle Mountain.

Both of these mountain roads had plenty of bends and scenery to keep us entertained. 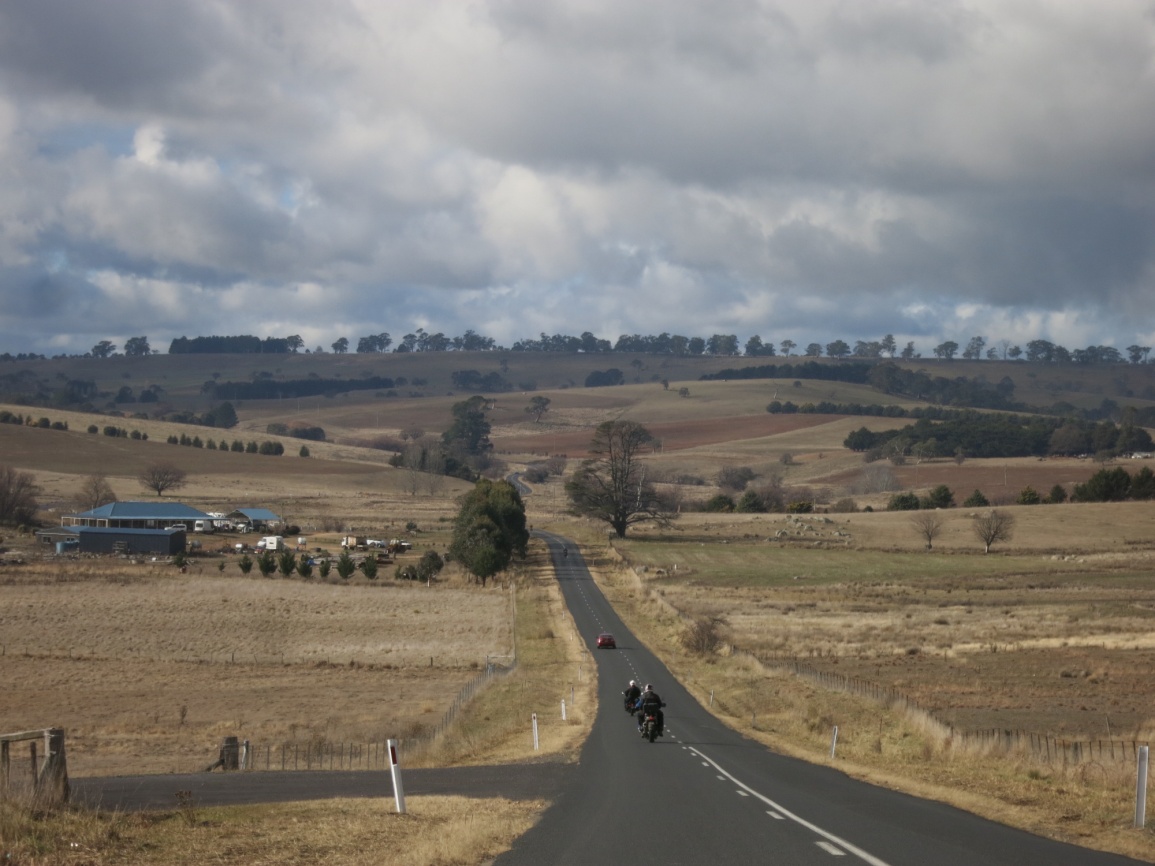 Bruce and Cynthia leading in the Camry due to Carberry problems 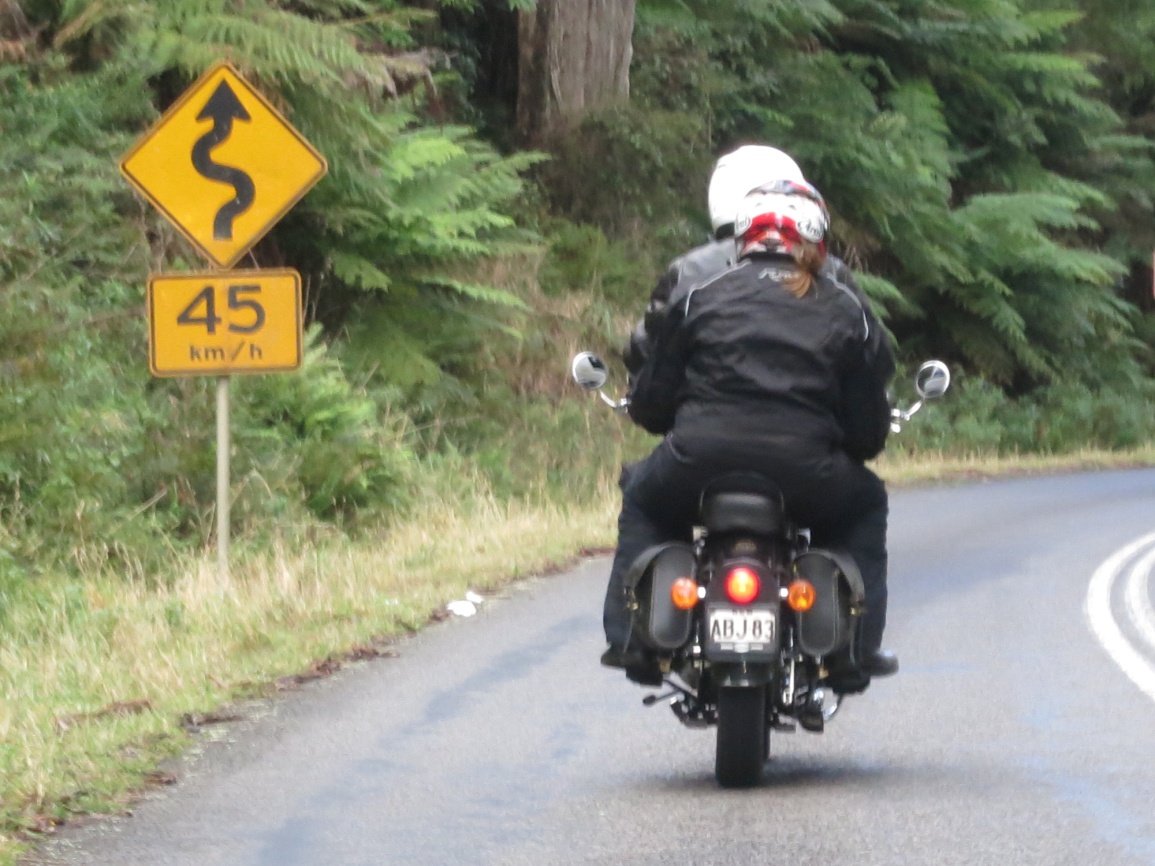 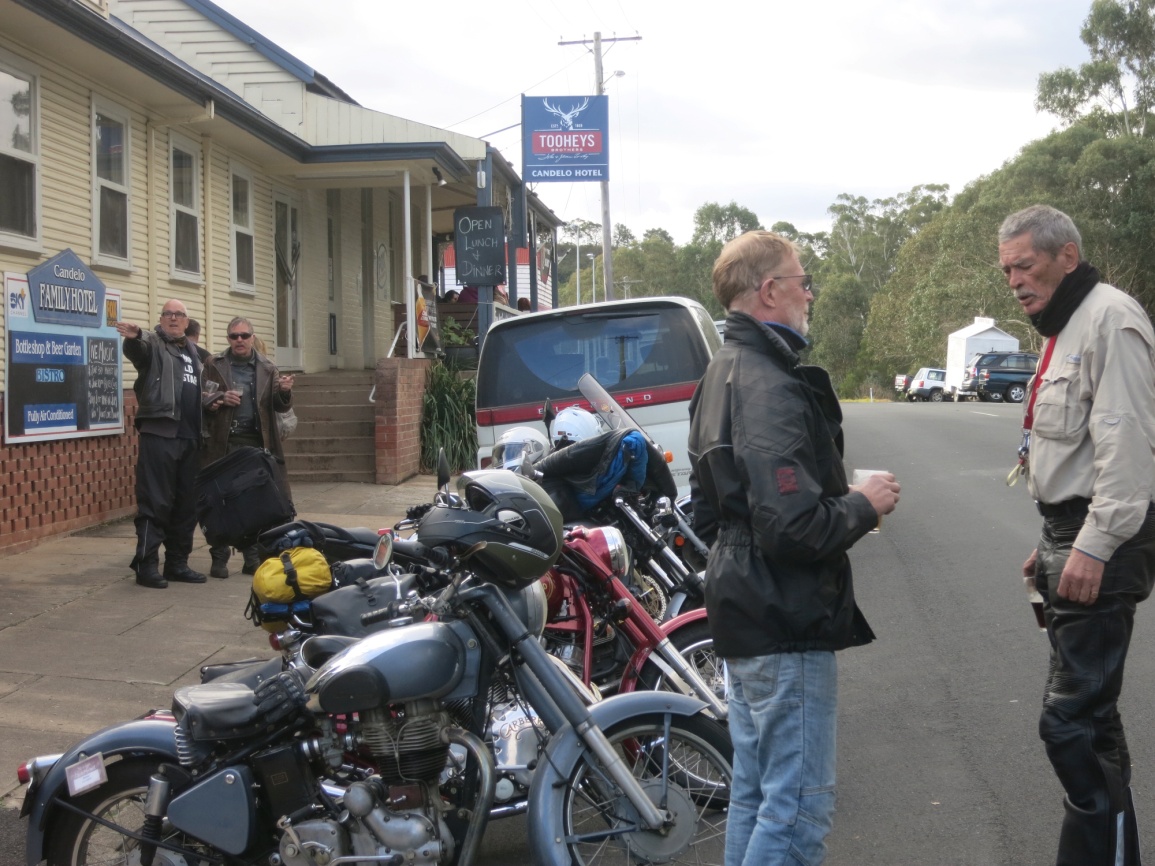 A catch up with Mal Gilles at the Candelo Pub

Sunday’s dinner was at the Tathra Hotel where we awarded the following trophies. 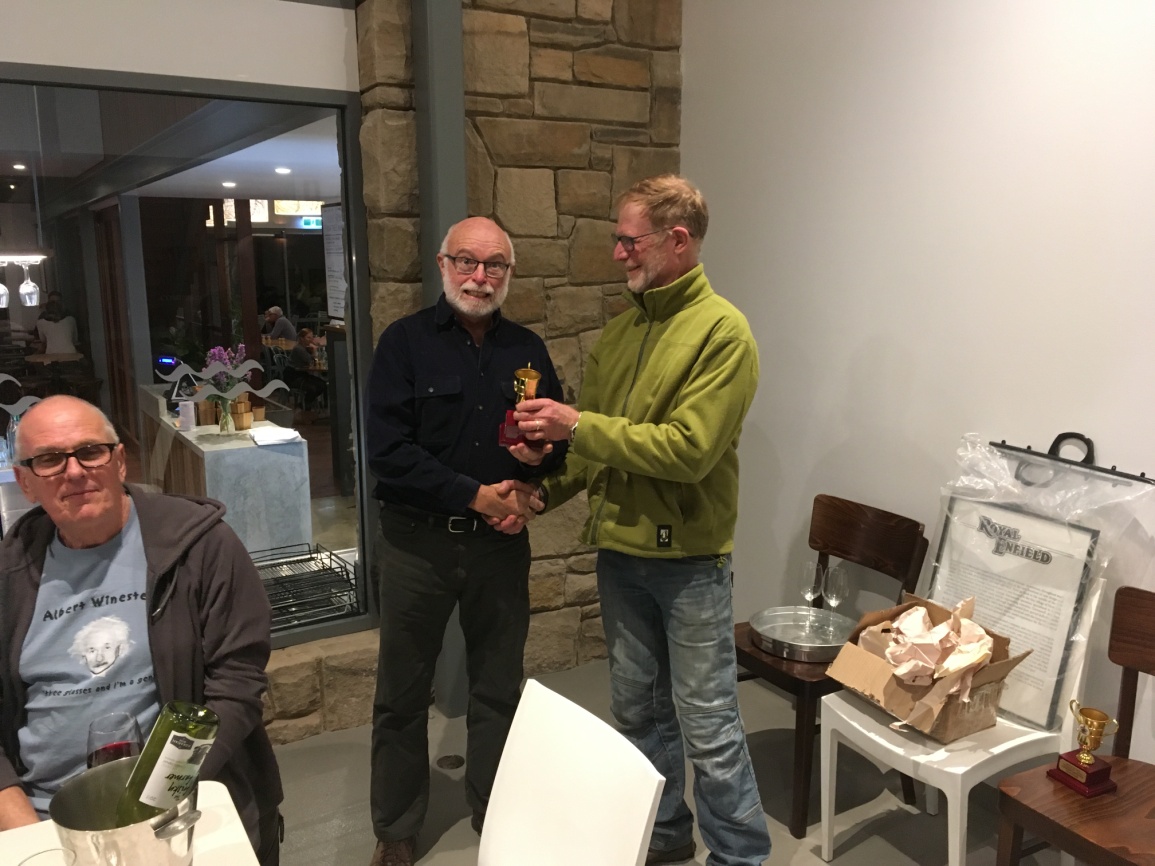 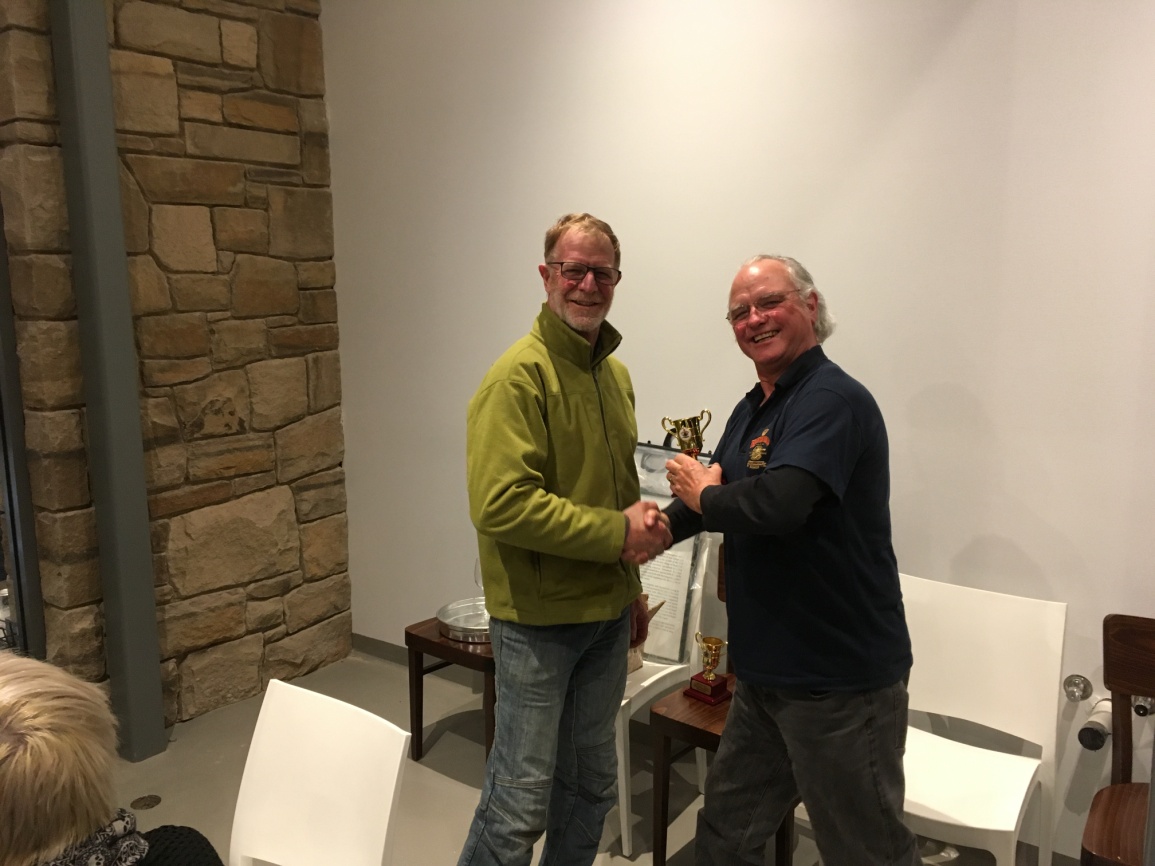 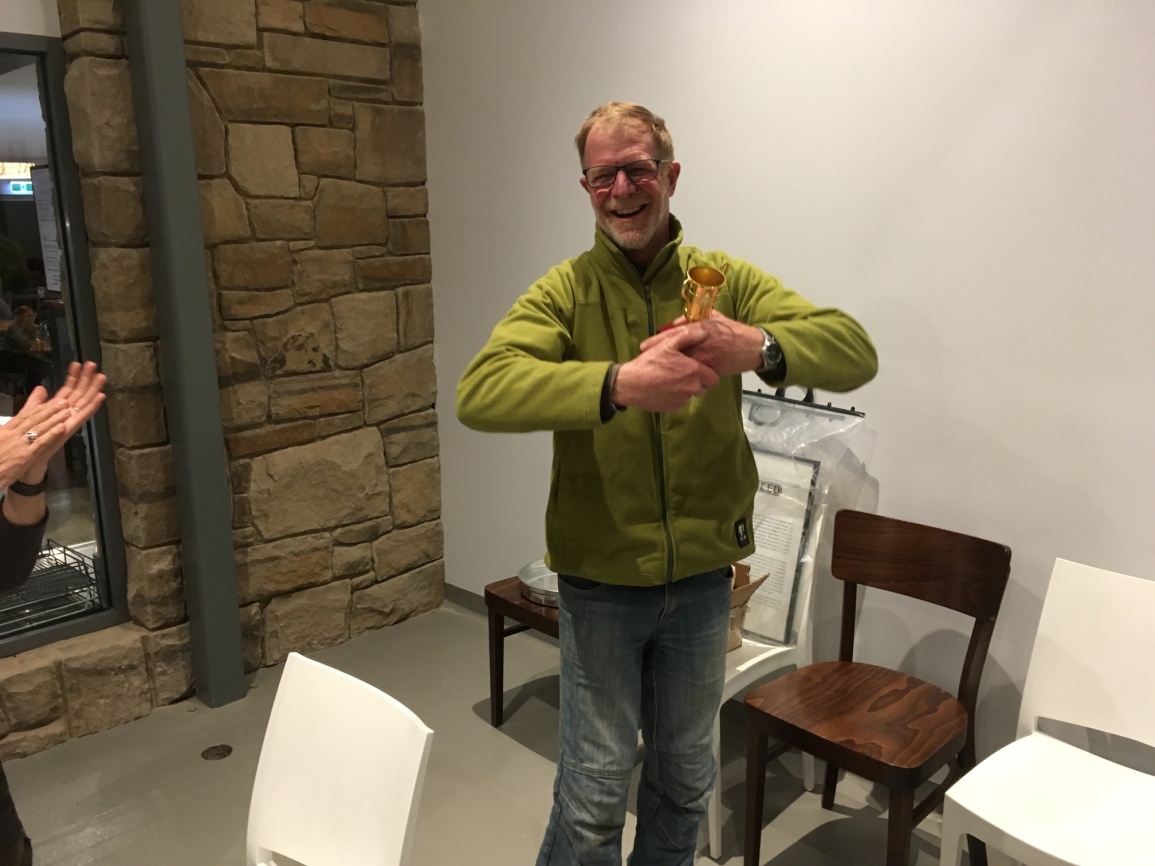 Thanks again to all those who attended this year’s Winter Rally, for me it was good to ride an area that I hadn’t been to on a bike before. I think there is scope to return to discover another part of the NSW South Coast in the future.