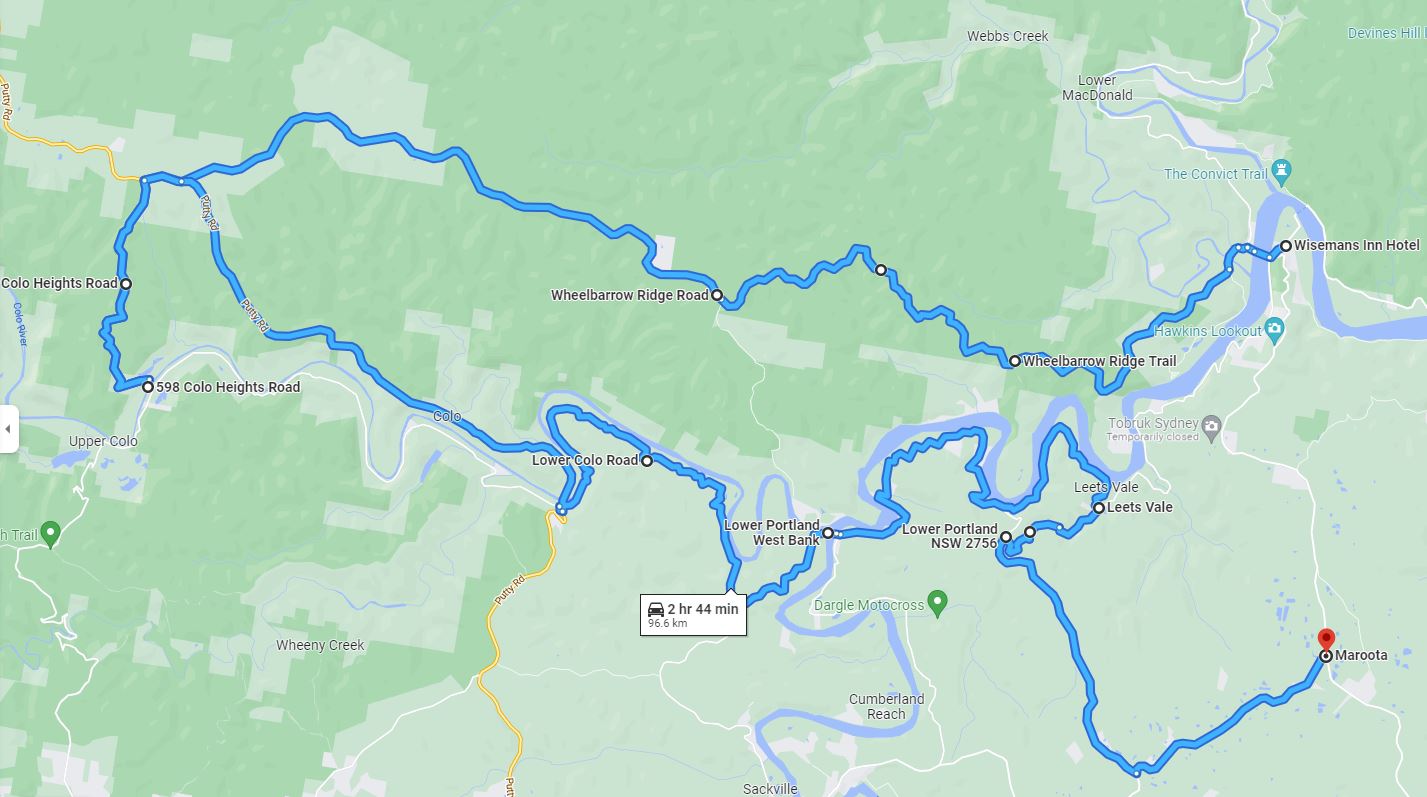 Paul Selwood and I organised a short afternoon Himalayan ride on Sunday 8th May 2022. Being Mothers Day we could not leave till 11am and, since It couldn’t be too far away, we decided just to head up to Wisemans Ferry and have a poke around in the dirt on our old familiar trails as there was no time to be adventurous and try to find new places to ride like we usually do.

We posted our plans on the Royal Enfield Club forum but got no takers. We also posted an event on the Facebook Himalayan Group as an short easy ride that suited beginners and a few people said they were interested and a few committed to going so we arranged to meet them at Wisemans Ferry at 12pm.

We also said we would meet Deen, one of the guys from the Group at 11am at Dural Shell since he was coming from Cherrybrook, but he was running late due to Mothers day commitments and messaged to say he would just see us at Wisemans. We stopped at the Shell anyway just in case and also so Paul could top up with fuel and we heard what we thought was a Himalayan ride past and wondered if it was someone from the FB Group.

Since we were early we thought we would make a detour off Old Northern Road down to the Old Leetsvale Road to check out River Rd as I had heard it had been closed due to floods. As we approached Cliftonville Rd turn off we came across the same bike, a KLR650 that we initially thought was a Himalayan and he followed us along the road for a while but when we pulled off down the Old Leetsvale Trail he continued on towards River rd.

The steep track was pretty eroded, rocky, sandy and muddy in places from all the storms and we took our time getting through the ruts and washouts. When we stopped at the bottom at River Rd the guy on the KLR was there. We had a quick chat and introduced ourselves and told him our ride plans and since he was riding solo we invited Doug along to join us.

The three of us made our way to Wisemans Ferry where Deen and Al were waiting, and John, who we had ridden with a few times before arrived from Terrigal soon after.

We had a quick coffee and a bite to eat and a chat about where we could ride. The plan was to show them the tracks on the western side of the river between Wisemans and Colo. We held a quick ride briefing before heading off as some of the guys, being new owners of Himalayans, had not done any dirt riding at all before. We told them that the fire roads were pretty easy and there would possibly be car traffic so it was important to keep left on corners. 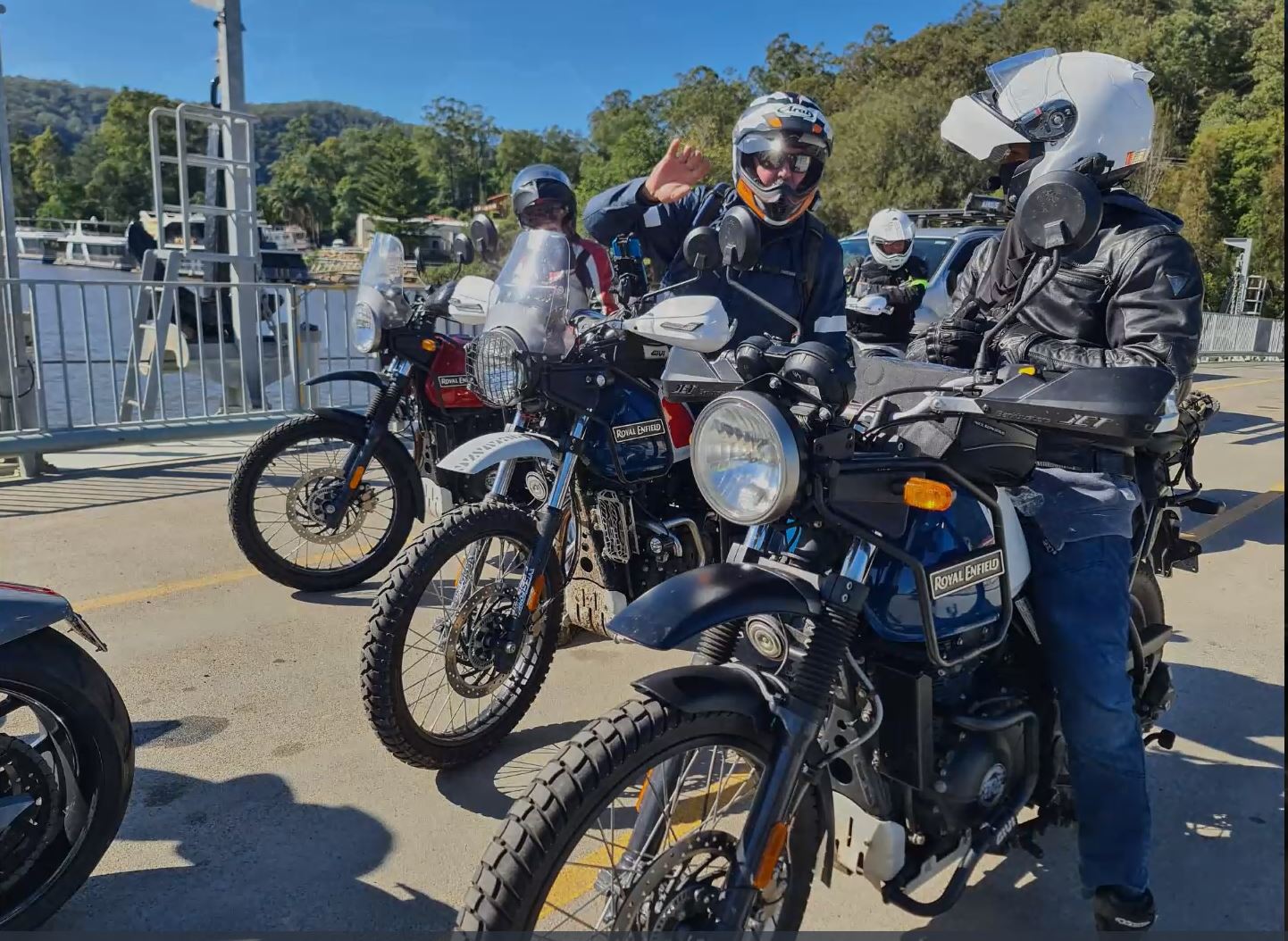 We went over Webb’s Creek Ferry and up Bicentenary Rd to get to the Wheel Barrow Ridge Trail / Greens Road intersection. We stopped there and re grouped and the new guys seemed to be doing ok so I upped the pace a bit and continued to the next rest stop where Webbs Creek Trail branches off. 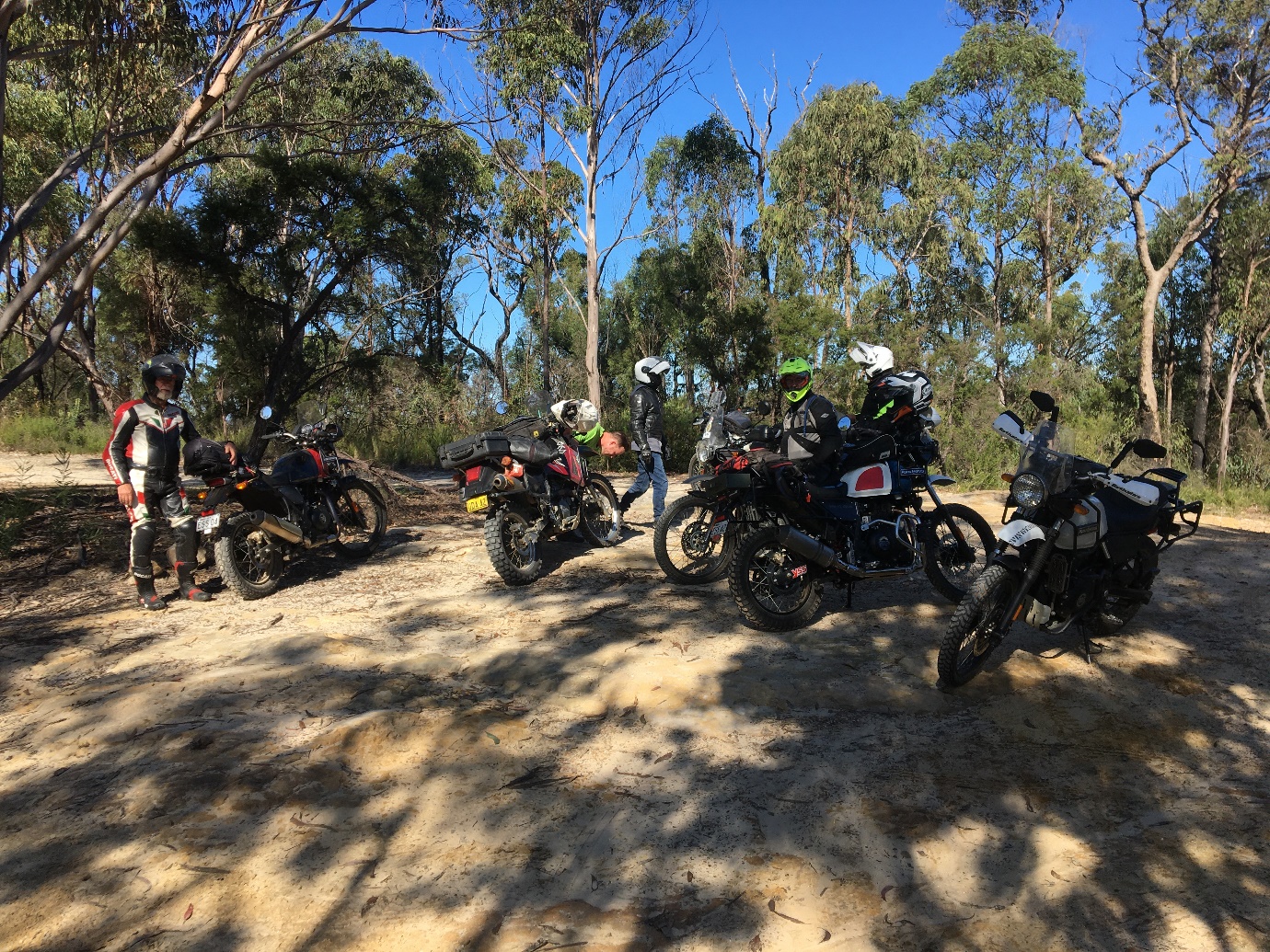 Paul went ahead from there and set his drone up to get a video of the group. We waited a few minutes for him to get sorted and a short way along the road he was standing on the side of the road and the drone was hovering above us as we road past. 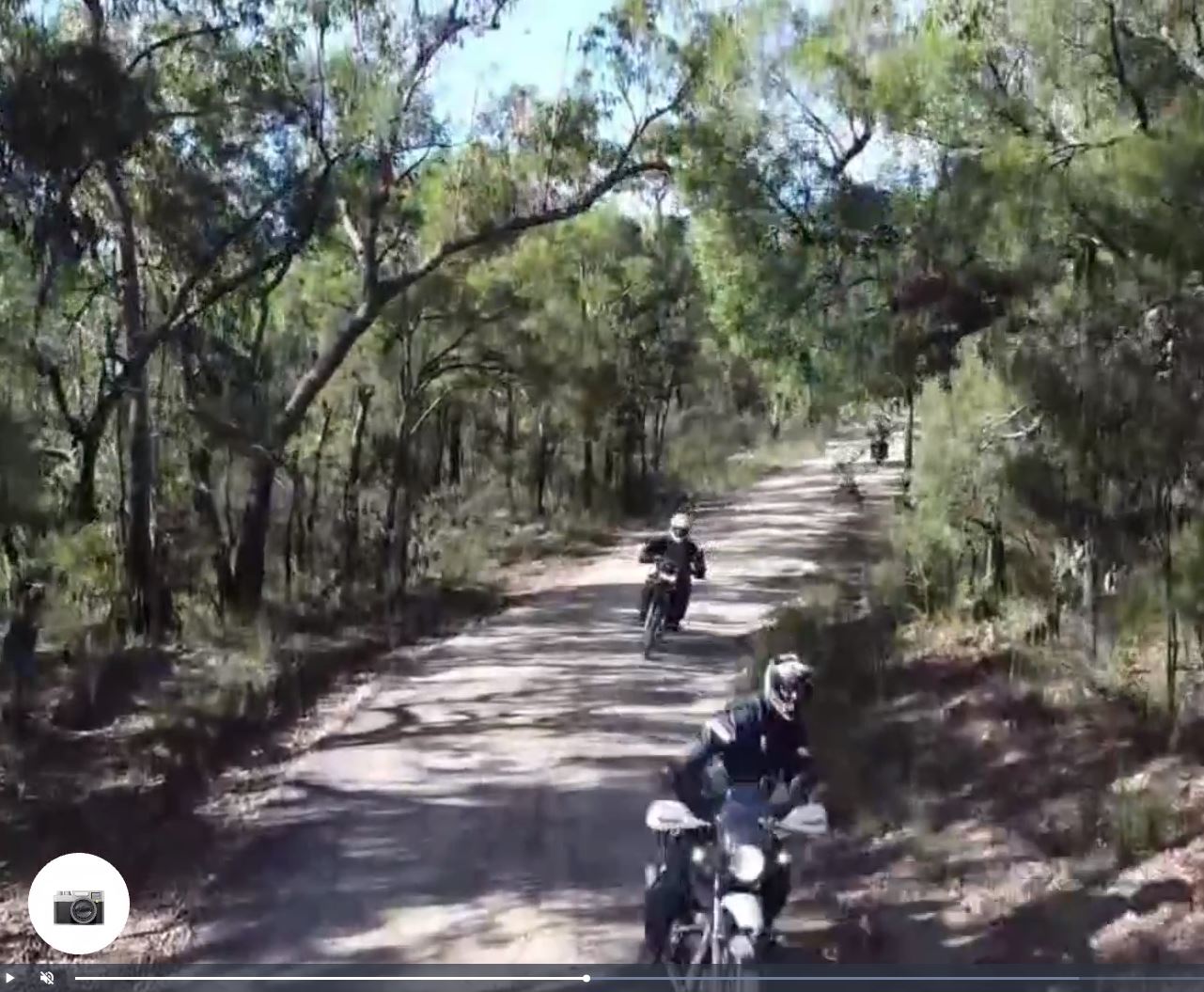 Wheel Barrow Ridge Trail joins Wheel Barrow Ridge Road about half along on its way from Lower Portland to Colo Heights . We stopped there and had a discussion about where the group wanted to go. South would lead back to Greens Road which is technically closed to through traffic due to flood damage so we went north to the Putty Rd at Colo Heights.

Al decided to leave us there as he had a long way back to the south side of Sydney and the rest of us turned the other way onto the Putty Rd then went down Colo Heights Road to Upper Colo to check out the old wooden bridge which was taken out by floods. 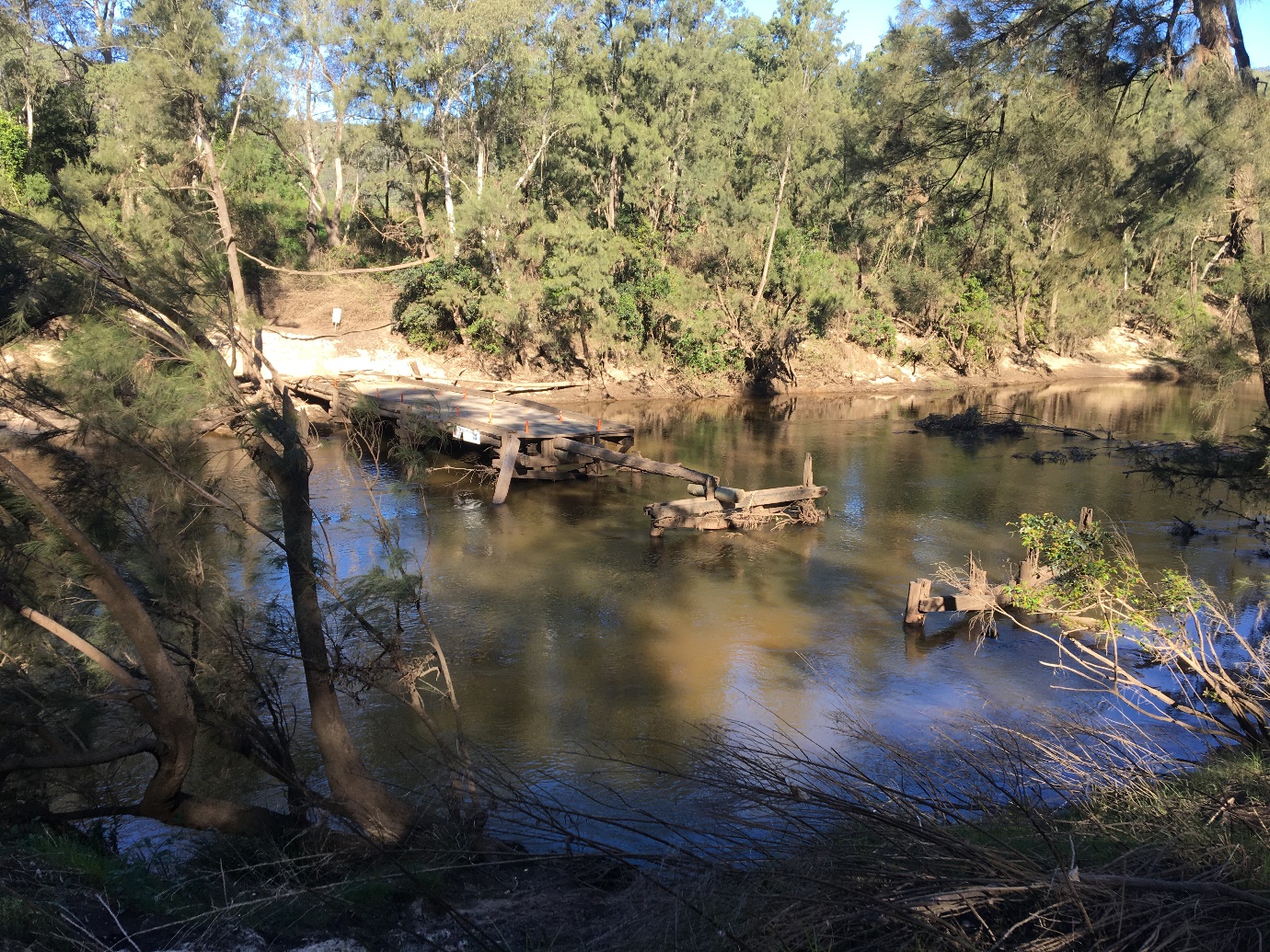 The bridge is scheduled to be replaced later in 2022

Paul got the drone out again and flew it over to look at the bridge and also took a few stills of the group. 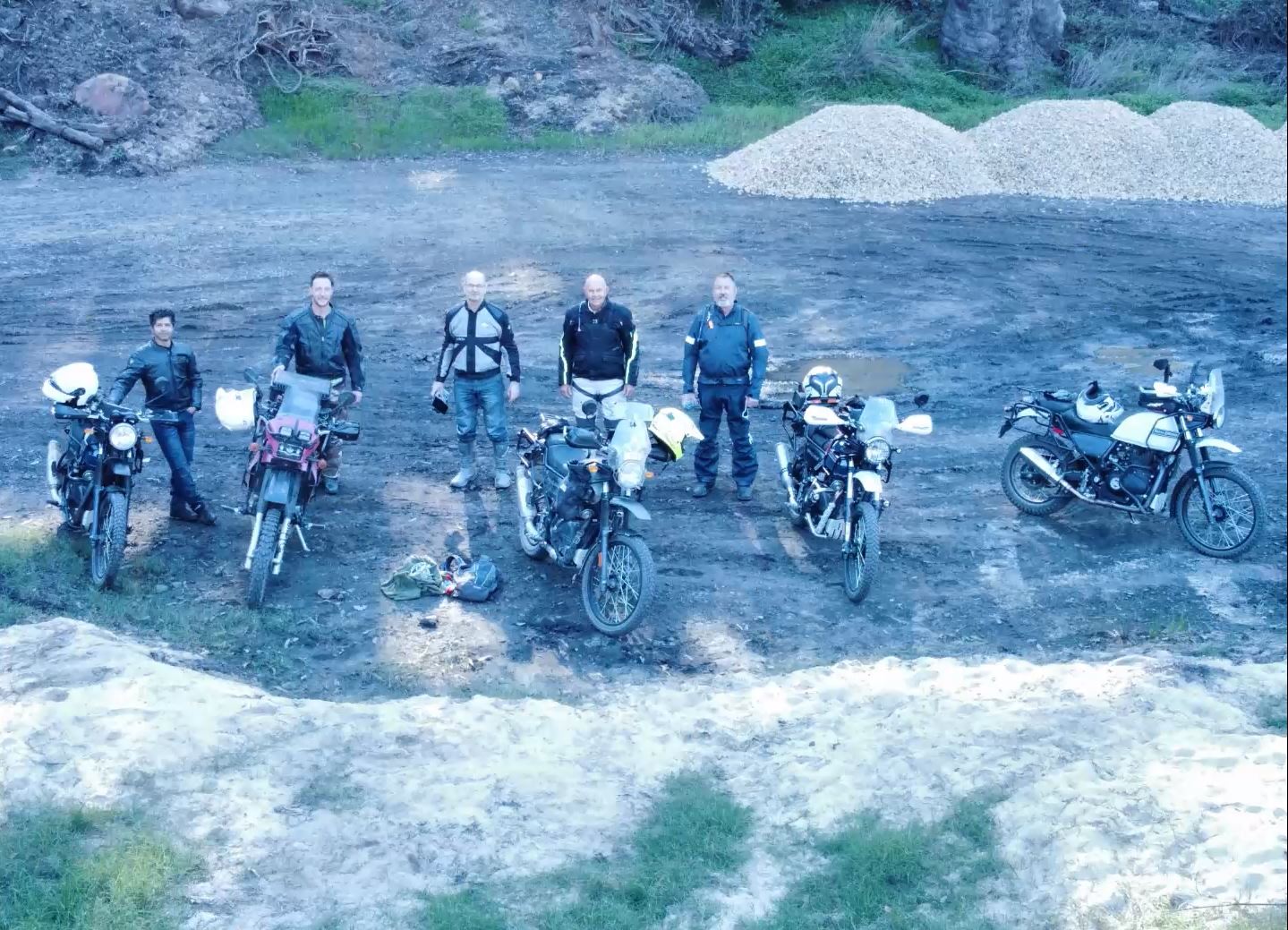 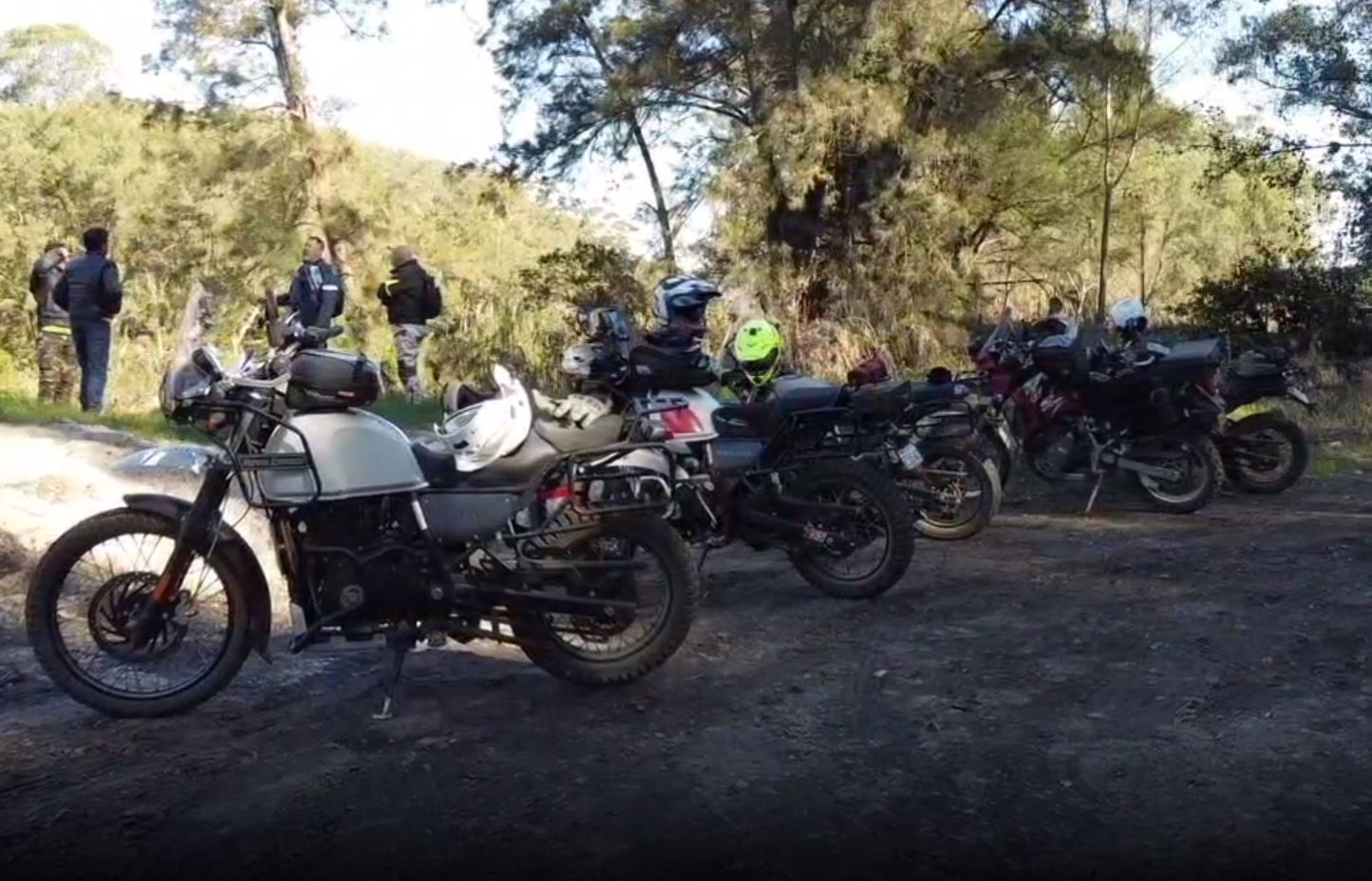 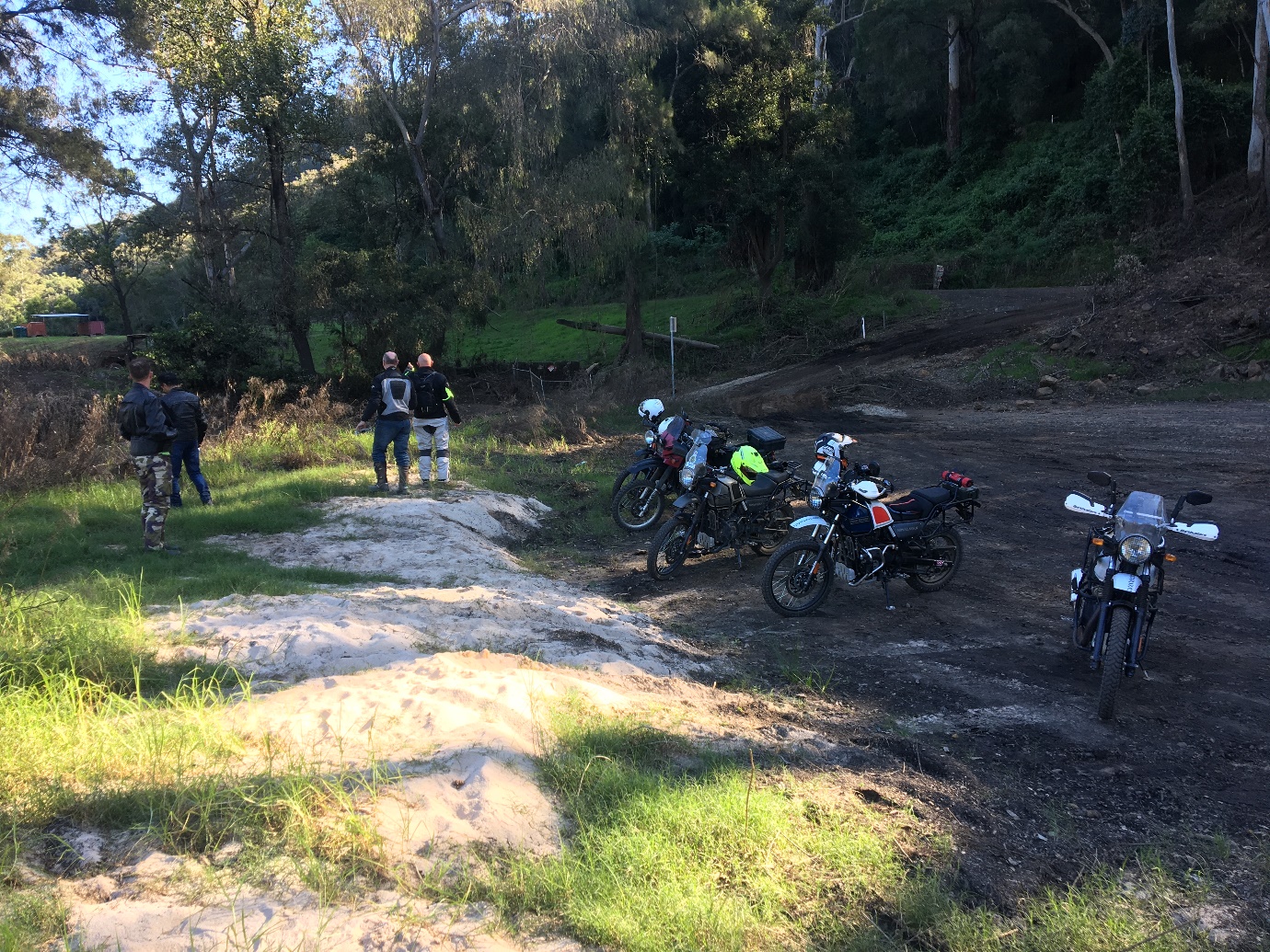 From there it was back to the Putty Rd and down to Colo and onto the Lower Colo Rd which winds it way along to where the Colo River joins the Hawkesbury Rive at Lower Portland. 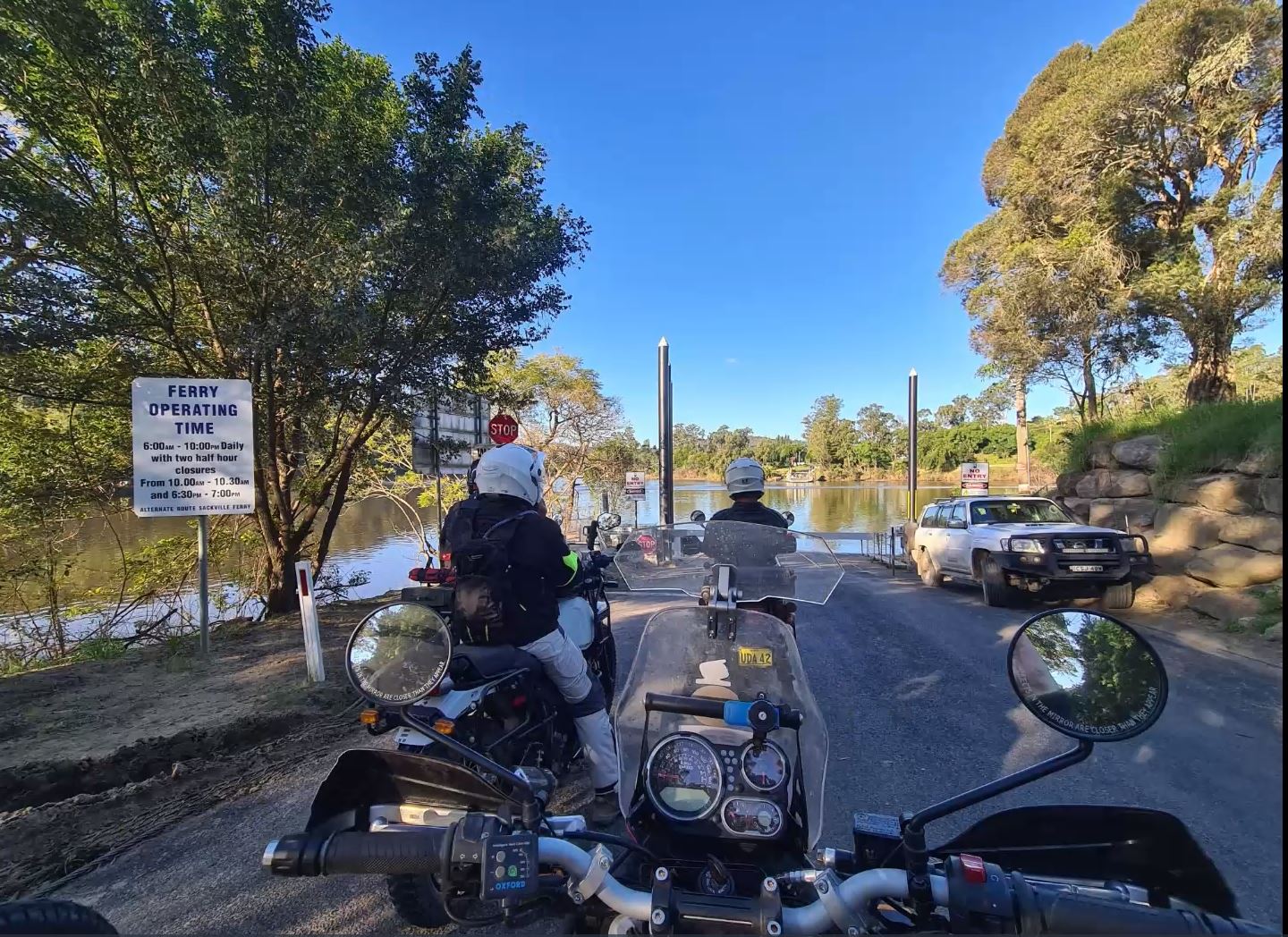 Here we crossed the ferry and asked the group if they were all ok attempting the Old Leetsvale Road then headed north on River Rd back towards Leetsvale where we met Doug earlier in the day. He was keen to give it a go since he missed it this morning and everyone else wanted to check it out as well.

We stopped and gave the guys some pointers and told them what to expect on the trail. Paul led the way and I rode as sweep and helped Deen through a few challenging bits. He was coming to terms with off road riding and after a few minor spills he was able to master speed control with the clutch and this made it easier to get through some of the tricky sections where there were ruts and rocks and other obstacles that he had not come across before.

After a quick stop at the top of the trail to re-live some incidents we planned our ways home and took off back towards the Old Northern Road.

It was great riding with new people and showing them some of the tracks in our area.

We look forward to organising another ride with them and others in the future where we can travel a bit further to find some more interesting places to ride.